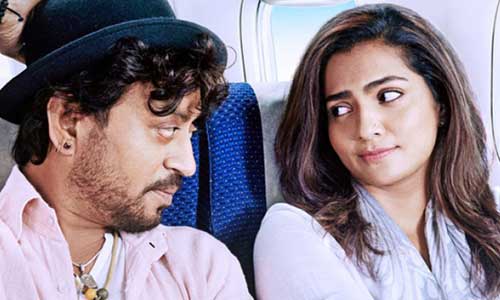 After her last film, Hope and A little Sugar, Tanuja Chandra’s Qarib Qarib Singlle comes after a gap of nine years.Starring South star, Parvathy and the talented Irrfan Khan. It’s all about the affair of the heart, a mature yet sweet love story.

The story is simple and realistic. It’s about two completely different adults who go on a journey from Jaipur to Gangtok. Jaya (Parvathy) who’s a workaholic widow and Yogi aka Yogendra Kumar (Irrfan) meet on a dating website. The two are like chalk and cheese, while Jaya is an introvert when it comes to meeting new people, an extrovert is an understatement if you had to describe the character of Yogi! He’s not only outspoken but also wears clothes that define him, loud and colorful.

If you’ve loved Irrfan Khan in Lunchbox, Piku and Hindi Medium, you’re going to adore him in this one. He makes the character come alive with his realistic expressions and dialogue deliveries. He’s charming and funny. Malayalam actress Parvathy makes her Bollywood debut with this film and she is an absolute delight to watch on screen. She plays Jaya perfectly and she’s absolutely real, unlike the typical Bollywood female leads and that’s what makes the film really refreshing. The two of them make the film relatable and fun. Most of the songs in the film are background songs.

The characters take us on a journey from the North to the East as Yogi, uses his charms to convince Jaya to go on a road and train trip. Though Jaya doesn’t tell everyone the truth about where she’s heading. Their journey starts from Mumbai and goes to Dehradun, Roorkee, Jaipur and finally Gangtok. Tanuja Chandra gives us a glimpse of all these scenic and beautiful places through her film. The interaction between the two characters seems realistic. the credit goes to the talented actors.What I liked about the film is that there are no over the top kind of dialogues nor over the top acting. I also loved the way Parvathy suddenly breaks into Malayalam when she’s frustrated and angry.

It’s a sweet, light, breezy rom-com you surely should not miss!

What Happened When Varun Dhawan & Anushka Sharma Had To Cycle...