HotFridayTalks
Home Movies Movie Review No Fathers In Kashmir Movie Review: A Well Made Film That Is... 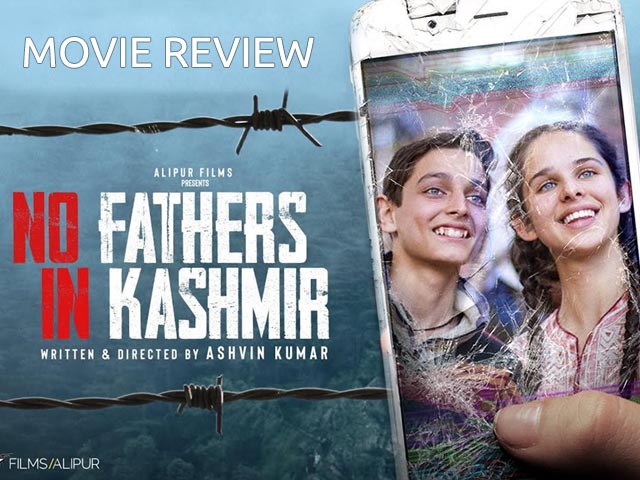 What’s the first thing that you visualise when you think of Kashmir? Greenery, pristine mountains, happy red cheeked little faces, tulips, the beautiful dal lake, as romanticized by some of our Bollywood films right? Well, then you need to watch No Fathers In Kashmir to get the real picture.

No Fathers in Kashmir is the story of a young girl, Noor (Zara Webb), who lives in London with her mother Zainab (Natasha Mago), and comes to Kashmir to spend time with her grandfather, Abdul Rashid (Kulbhushan Kharbanda) and grandmother, Halima (Soni Razdan), as her mother is planning to get married for a second time.

Noor meets a young Kashmiri boy, Majid (Shivam Raina), whose father has also gone missing. The two strike a friendship and become inseparable. While Majid has been taught not to ask any questions about his father’s disappearance, Noor wants to know the truth, so the two go on their quest for an answer and a closure. As Noor is heard saying, “There is no way I will go back to England without seeing where my abbu was buried.”

What is remarkable about the film is the way it has been shot, the performances by each and every actor, and the authenticity that the director has tried to maintain. Everyone, and everything looks absolutely real. Both Kulbhushan Khabanda and Soni Razdan as Noor’s grandparents are brilliant. They take us through the pain as parents who have lost their only son. You can feel a lump in your throat, in the scene where Razdan tears up as she signs a paper, where she has to formally declare her son dead, so that her daughter in law can remarry.

The film, however, belongs to the two teen actors, Zara and Shivam who have the most difficult and emotionally draining roles to portray and have done it brilliantly.The two are like any curious teenagers, who want to explore and experiment, yet they have the maturity which comes with losing a parent, and the two have played their parts perfectly.From clicking selfies, to the simple thrills of going for a night ride on the scooty, to trying to smoke a pipe like grown ups and experiencing their first kiss, the two characters are relatable.They also represent the many faces of Kashmiri children we might have seen on TV or read about in the papers.

Fathers in Kashmir is a brilliantly made film with the problems of Kashmir, and the Kashmiri people as a backdrop. The film is thought provoking and gives us an in depth insight into what the fight for azadi in Kashmir is all about. It’s a stark reality about the prevailing problems in Kashmir and you experience the pain, anger and the agony along with the characters in the film.The credit goes to the Oscar nominated director Ashvin Kumar, who also plays an important character, Arshid, in the film. Ashvin’s story-telling is simple, real and thought provoking.

There are many instances in the film, that resonate your own thoughts, like the question that Noor asks Majid, about what the difference between a militant and terrorist is, or when Abdul Rashid asks Arshid what will he do even if he gets the freedom. Also why are they fighting for azaadi? Questions like these, that probably goes on in everyone’s minds, especially when every single day the newspapers are filled with heartbreaking stories about both militants and soldiers being killed. It also makes you wonder who is paying the price for the constant battle that is going on in Kashmir.

Abdul Rashid’s dialogue, as he speaks to his grandchild, “We will never know why people do what they do, because we were not there,” rightly sums up what the film is about. Sitting in the comfort of our homes, it is easy to judge what is going on there, and who is suffering, or who is causing the sufferings, but the question is, how much do we know about Kashmir?

Watch the film for a reality check, and of course, the brilliant storytelling and performances by all the actors.