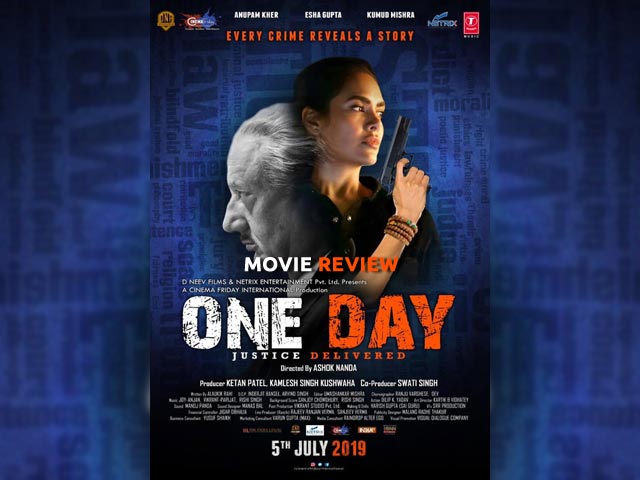 A few minutes into the film and I started wondering why and how a brilliant actor like Anupam Kher agreed to do a film like One Day : Justice Delivered. Though the thought behind the film is noble and something we’d all like to do ; bring criminals to justice in a day if we had a choice.

The film has a very ‘B grade film’ feel to it, right from the settings to the backgrounds, costumes, sets and even some of the actors. There is Esha Gupta who plays a fierce cop, Laxmi Rathi and also does a seductive number as an undercover cop. She has a now you hear it, now you don’t forced Haryanvi accent. Yep she goes into the Haryanvi mode when she tries to act like the tough cop but conveniently forgets the accent when she has a conversation with a senior judge! She also walks around with a gun strapped to her thigh! In other words, Esha Gupta is a total miscast.

It’s Anupam Kher who steals the show, though I wouldn’t say it’s his best. Like always he’s brilliant at what he does. He plays the ageing Justice Tyagi to perfection he’s even changed his posture to go with the character of an unassuming disillusioned judge. He maintains the calm and posture throughout the film, it’s difficult to believe that he is anything but a good family man and a law abiding citizen.

Kumud Mishra is another reason for making the film tolerable. Kumud as Inspector Sharma brings some relief in an otherwise insipid film! It’s best not to mention the other characters in the film as there is nothing much to write home about their performance.

The script and screenplay are dreadful. The forms of torture used by Justice Tyagi are cringe worthy ; yes, there is a scene where one of the criminals is tied up with fence wires and has those Diwali lari patakas taped all over his body! There are many such cringe worthy scenes and dialogues in the film. Though just before the film ends there is a twist, which is like an incentive to keep you awake till the film ends! Yes, the film is slow paced and could have been cut shorter.

What I enjoyed most in the film was hearing Usha Uthup’s voice after a really long time. I’d suggest ; give the film a miss if you want to do justice for yourself!

Star Wars: The Rise Of Skywalker Trailer : A Day...