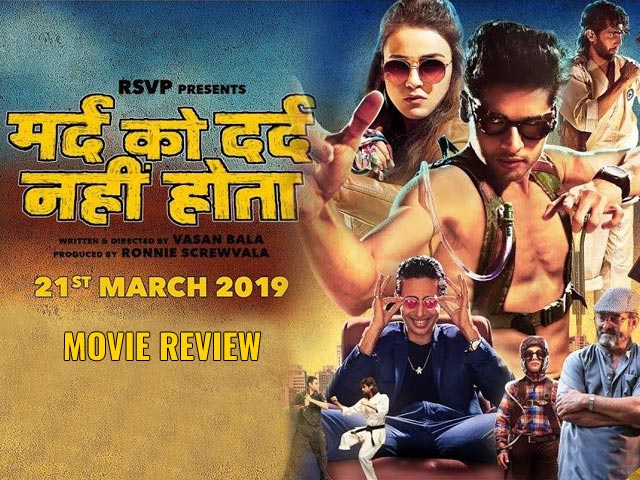 Vasan Bala’s Mard Ko Dard Nahi Hota is a film that’s as quirky and interesting as the title! The film opens with an interesting number from the 1992 Chiranjeevi starrer Aaj Ka Goonda Raaj, which plays in the background during the opening credits of the film.

Mard Ko Dard Nahi Hota is the story about Surya (Abhimanyu Dassani), who is born with a rare condition called Congenital Insensitivity. Surya feels no physical pain at all. He is very attached to his ajoba or grandfather played by Mahesh Manjrekar who tells him stories about his heroism. Surya loves watching movies on the VHS about Kung Fu and Karate especially the ones like Trouble In Little China, Enter The Dragon, Gymkata, Game of Death etc. He comes across a video about a 100 man fight, which stars the one-legged Karate Mani (Gulshan Devaiah). He grows up dreaming of becoming like Karate Mani some day and starts learning martial arts secretly, as his father (Jimit Trivedi) disapproves of it.

This is a film that anyone who grew up in the ‘80s and ‘90s can relate to, the ones who grew up later might just wonder what the VHS tape is! The film is also an ode to the films of the late ‘70s and ‘80s. Surya lives like the characters he watches in the movies and even uses the dialogues like “Akraman” and “Paap Ko Jalaa Ke Raakh Kar Doonga,” in his daily life!

Surya, is like those typical good boys and is charmingly childlike.He thinks he can take on the bad guys single handedly and makes it his mission to catch the chain chors, along with his childhood friend Supri (Radhika Madan).The film is a quirkier version of a typical masala Bollywood film.

The entire cast of the film is brilliant! Abhimanyu Dassani who makes his Bollywood debut as Surya fits into the role perfectly. He’s got the perfect balance of being a grown up, yet having the childlike innocence and living in his own make belief world. He’s a natural and is very good with action scenes as well.

We’ve seen Radhika Madan in Patakha, she has a flair for playing her roles effortlessly and making it believable. She’s as good or even better than the men at the action scenes. When she beats the bad guys black and blue, you just want to clap for her!

A loud round of applause for Gulshan Devaiah, who plays a double role in the film, as Karate Mani and his evil twin brother Jimmy. Gulshan is brilliant! While he plays a beaten and drunk karate master to the T, he is hilarious as the bad guy, Jimmy. He totally steals the show.

Mahesh Manjrekar, as Surya’s grandfather plays a significant role in the film and he’s a grandfather kids would love to have. He’s fun, cool and a rule breaker. The other characters like Jimit who plays Surya’s father, the child actors, etc. have also been cast well.

The story is simple yet woven well and the screenplay is good too. The film is a perfect mix of great dialogues, drama, emotions, action and humor.

Mard Ko Dard Nahi Hota is worth the money!