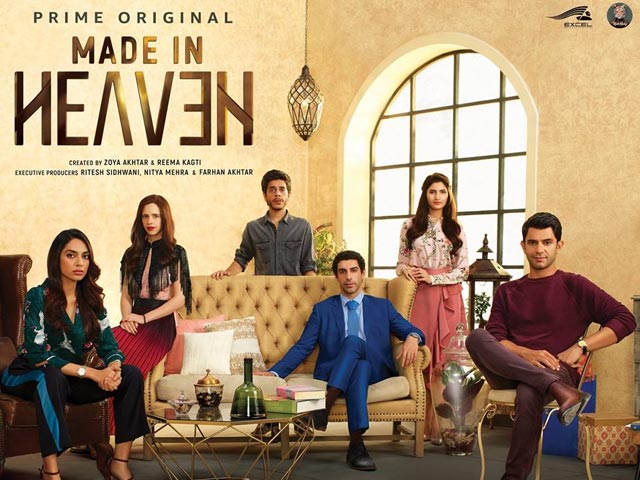 Amazon Prime Video original brings a special show this Women’s Day with Made in Heaven.The series which is all set to start streaming in a few hours from now is a satire on modern Indian weddings.The show is created by Reema Kagti and Zoya Akhtar and unlike other Hindi web series, has not one, not two but four different directors.

The series which has nine episode is directed by an amazing team of directors; Zoya who’s recently released Gully Boy as been the talk of the town, Alankrita Shrivastava who directed the critically acclaimed Lipstick Under My Burkha, Nitya Mehra who is best known for directing Baar Baar Dekho and the only man in this team of women directors, Prashant Nair, whose directorial venture Delhi In A Day was much talked about.

Made in Heaven, stars Arjun Mathur, Sobhita Dhulipala, Jim Sarbh, Kalki Koechlin, Shashank Arora and Shivani Raghuvanshi. The series as revealed by the makers and some of the cast, is a story about weddings and all that goes on at a typical Big Fat Indian wedding. However, there are many layers to the stories that have been intertwined with the wedding. The series is a satire on the phrase that says “ Marriages are made in heaven.”

Tara (Shobhita) and Karan (Arjun Mathur) are wedding planners much like Anushka and Ranveer from Band Baaja Baaraat.They plan perfect weddings for couples but the irony is that they are grappling with problems in their own married life! Then there is a wedding photographer played by Shashank, who dreams of directing his own documentary film someday.”I kind of play the narrator of the story as a photographer,” says Shashank.

Made in Heaven seems like an apt, fun, interesting and ironic portrayal of our desi weddings. Don’t we Indians just love big fat weddings and all the drama that comes with it?