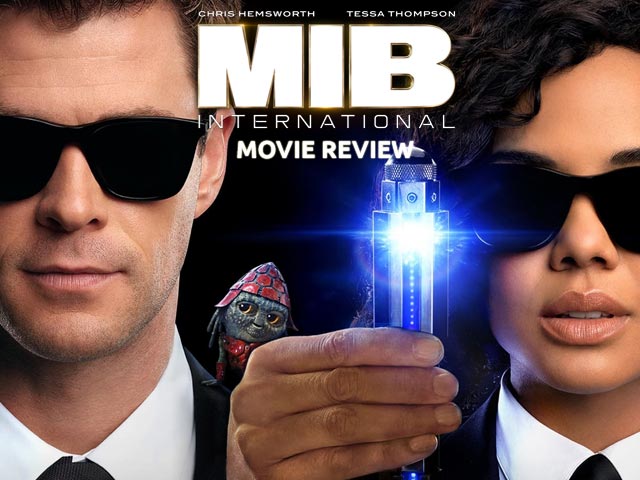 Thompson and Hemsworth team up to save the world from alien invasion and to find a mole in their agency. The only thing different about this film from the others in the series, is that unlike the other series, here the old seasoned agents are not taking the younger ones under their wings. Here the younger ones have a mind of their own and do things they feel is necessary to save the world.

Hemsworth is really funny and has great comic timing, while Tessa as agent M has a great screen presence. The film gives us very little time to connect to M before she is already a more than competent agent.Tessa Thompson and Chris Hemsworth are the best part of the film, they have a great rapport with one another, their chemistry is great, they riff off each other marvelously, and they make this movie easily watchable. One character I wished was in the entire film, was Emma Thompson. She had very little screen space.

The script by screenwriting duo Art Marcum and Matt Holloway is weak.
The villains in the film felt like plain CGI characters and didn’t really leave an impact, they clearly had very little to say. What I did feel was that the film had no propelling plot. The whole film is centered around one small device. The film did not feel different, it did not feel revitalised, like it was supposed to do. It felt like yet another film in the franchise. MIB International misses out everything that made the original film so endearing.

Some of the dialogues, especially those spoken by Kumail Nanjiani’s Pawny do make you laugh. Pawn for me was the scene stealer, he has the most laugh lines in the film. Every time his character is on the screen, you are in for a treat! But then again, it’s telling how they have used a reference from Hemsworth work in Avengers and not a man in black, when he picks up a miniature version of a hammer (that looks like the one he uses as Thor) to throw at the villain, for some comic relief. The gags are weak, the film feels soulless.

MIB International is sleek and clean unlike the others that were grimy with things like heads exploding etc. but the film lacks emotions, feels artificial and the aliens feel unthreatening. In a nutshell, Men in Black: International, is a mediocre and a bland spin-off.