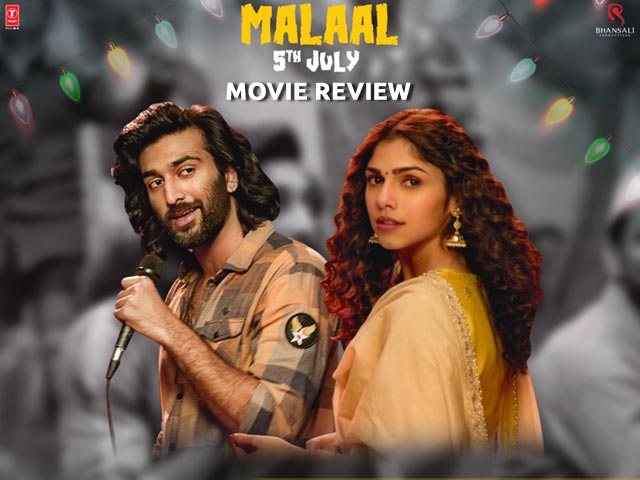 Sanjay Leela Bhansali’s Malaal, starring his niece Sharmin Shegal and actor Jaaved Jaffrey ’s son Meezan Jaffrey based on the story by R Selvaraghavan, is something we have seen before. The story is about Aastha (Sharmin) and Shiva (Meezan) who fall in love, but they come from two completely different backgrounds.

While Aastha comes from an elite family who’s going through bad times, and hence have shifted to the same chawl where Shiva, who belongs to a very middle class family lives. The two are neighbours and end up falling in love after their share of spats and hatred.

What is the conflict in this love story? There is no such major conflict except for the fact that Aastha’s parents want her to marry someone who they think is better and is well settled. They are against Shiva who is the complete Mumbai ka tapori, picking up fights, drinking and gambling all day. A story we have heard/ seen earlier too right?

But it’s the whole presentation and the performances that makes this film different and likeable. Coming from Sanjay Leela Bhasali’s production, the film obviously has the Sanjay Leela Bhasali touch and feel to it. The film is shot beautifully and every small detail has been paid attention to ; sets, costumes, supporting characters, as well as background passers. Some of the shots especially the romantic scenes look like a painting. The scenes have been artistically shot, like all Bhansali films. Visually the film looks beautiful. Even though the story is something we’ve seen in so many Bollywood films earlier, the film has a certain freshness about it.

Meezan has the potential to become the next big star if he chooses his films carefully. He has great screen presence and is brilliant as an actor. He seems to be a natural when it comes to dancing, emoting and even action. It’s difficult to believe that this is his debut. My favorite scene of Meezan is the scene where he breaks into an impromptu dance on the street, when he finds the perfect gift for Aastha. Besides being expressive, he shows some excellent dance moves in Aila Re too. Meezan is a whole package when it comes to being an actor.

Sharmin as Aastha is real and has a lovable unconventional look. She looks convincing as the naive, rich girl, who’s getting used to her life in the chawl, but it’s the emotional scenes where she needs to work on. She falls short when it comes to the intense emotional scenes. I thought her best reaction was when Shiva introduces himself and she gives him that shy, nervous look and quickly walks inside the house. She says a lot without speaking out.

Based in the 90s, the film has some beautiful little romantic moments, like waiting to see the girl you love at the bus stand everyday or writing love notes and throwing it across at each other’s balconies, etc. I would say a big round of applause to Sharmin and Meezan to bringing the simple old school romance alive.

Even though it feels a tad bit lengthy, Maalal is a film worth watching for the commendable acting by the two debutantes.