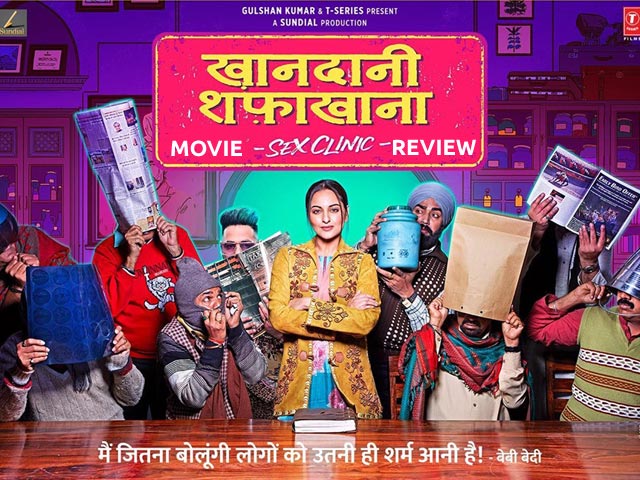 Khandaani Shafakhana has a good concept, about a feisty Punjabi girl Baby Bedi (Sonakshi Sinha) who inherits a sex clinic from her ‘mamaji’, Hakim Tarachand (Kulbhushan Kharbanda). However, there’s a catch, according to the will in order to inherit the clinic and be able to sell it, Baby has to run it for at least six months!

Sounds interesting isn’t it? Firstly, a film with a concept like this, has a woman protagonist, secondly the storyline is unique and deals with something that is taboo in our country. There is no doubt that the premise is interesting, but the pace of the film is languid, so much so you start getting restless and want it to speed up. The film also gets kind of preachy at times, like the scene where a 6 year old Baby Bedi corrects the spelling of sex and asks her mamaji how babies are made. Some of the scenes also feel stretched, like the scene where mamji’s old patients come to the clinic for their dose of medicine.

You can’t help comparing the film to Ayushman Khurrana’s Shubh Mangal Savdhan which dealt with a similar subject about erectile dysfunction or Vicky Donor about a sperm donor. Both Shubh Mangal Savdhan and Vicky Donor, dealt with the subject in a fun humorous way and it was genuinely funny. The humour in Khandaani Shafakhana seems forced and even Varun Sharma can do nothing to save that. Varun is repetitive and there;s nothing new about his character. Anu Kapoor as the lawyer is a wee bit over the top too.

Bad Boy Badshah who makes his debut with Khandaani Shafakhana is good. Badsha plays himself in the film and he’s quite a natural as an actor. Debutant Priyansh Jora who plays Baby’s neighbour at the clinic is good and is very expressive, but has very little screen space.Khandaani Shafakhana is Sonakshi Sinha’s film all the way! Sonakshi has done a good job as Baby Bedi, and looks every bit the Punjabi kudi she plays.

The intent of the film is good, but it would have helped if it was edited better and the pace was a bit faster. If you’re one of those who doesn’t care much about the pace of a film and have plenty of patience, go watch it but if you have a short attention span, wait for the movie to be released on one of the OTT platforms, so you can fast forward it!