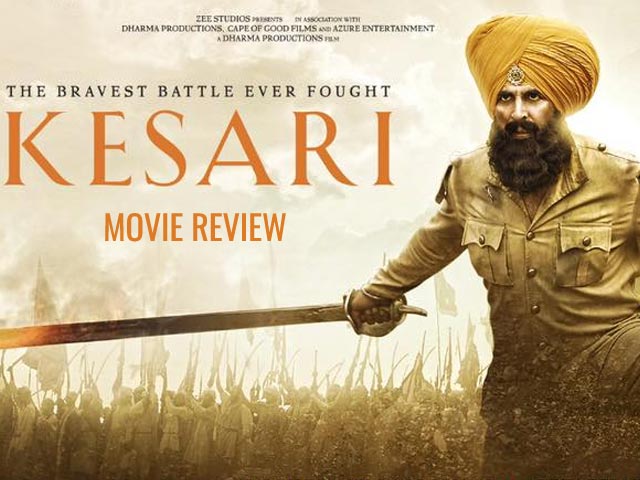 The Battle of Saragarhi was one of the greatest in military history, yet so many of us were unaware of it. We were unaware that twenty one soldiers from the Sikh regiment fought bravely against over ten thousand Afghans in 1897, and that too using single-loading rifles and their kirpans. These soldiers fought without fearing for their lives and made sure the Afghans did not succeed with their plans of further attacks. Kesari takes us back to history.

The credit goes to director, Anurag Singh and Akshay Kumar for bringing the events of the Battle of Saragarhi alive for us to know and see. To know about the valour of the Sikh soldiers. We could say that these brave soldiers have finally got the due they deserved.

Havildar Ishar Singh (Akshay Kumar) leads these soldiers in the fight against the enemy. He is a man with immense courage, and a man who risks his life to do the right and save people. This is established right at the beginning of the film, when he saves an Afghan woman from being killed. He does not hesitate to help the villagers to build a mosque or even to offer water to injured soldiers.

However, he’s not the only brave one, the rest of the soldiers are also equally brave and fight to save the country till their last breath.The director gives us fleeting emotional information about each of the soldiers’ lives back home. While one is saving a pair of army shoes to take back home for his aging father, another longs to see his little daughter, while one is newly married and longs to be with his wife. Ishar Singh too has a wife (Parineeti Chopra) back home, who is always around him in his imaginations and he has imaginary conversations with her.

The film does have flaws especially in the writing, It could have been tighter, and some scenes could have been done away with too.They could have avoided some of the horrifyingly graphic scenes, so as to make the film fit for a child to watch, because such stories of bravery, need to be told to the younger generations too.

However, the film does stir that feeling of patriotism in you and makes you want to stand up and applaud the brave soldiers. The film also reflects the sincere attempt of the director and the actors as well as the art director and costume designers who have tried to make the sets and costumes look as authentic as possible.

If you’re done with Holi celebrations, go watch Kesari this weekend, for the sake of the commendable bravery of the soldiers!

102 Not Out Movie Review: Amitabh Bachchan And Rishi Kapoor Are...