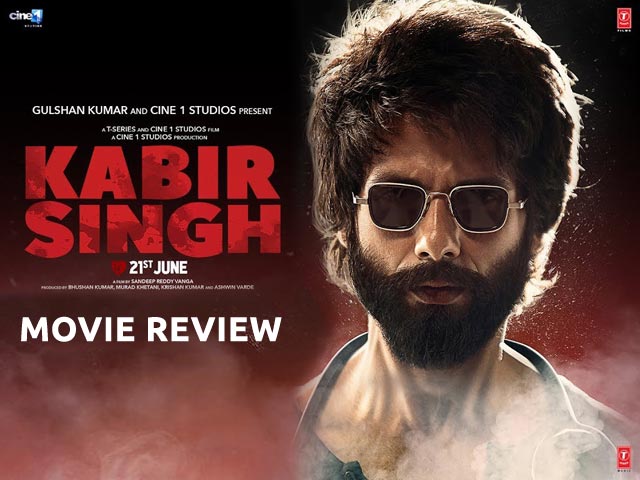 In this remake of the Telugu blockbuster called Arjun Reddy, Shahid Kapoor plays a doctor who has anger management and temper issues. Kabir Singh, like the original film is a story about obsessive love and self destruction. In other words, you could call it a modern day Devdas.

As far as the story goes, Kabir Singh is about a bright budding doctor, who falls head over heels in love with his college junior, Preeti (Kiara Advani). Kabir not only falls hopelessly in love with her but he’s also aggressive and obsessive and can go to any lengths for her. He is also feared by all the students as well as some of the faculty in his college.

Kabir and Preeti fall in love but things take a turn and the two are separated and that’s where the trouble starts. Kabir takes to drinking, smoking and drugs and goes on a path of self destruction. Does Kabir finally come out of it and do the two meet again? Well, no spoilers here, you’ll have to watch the film to find out for yourself!

The story is not exactly new, we’ve seen films like the Shah Rukh Khan starrer, Darr and Devdas, or Salman Khan’s Tere Naam etc. made on the similar subject too. What does set the film apart, is the fact that some fraction of the story is based on the director, Sandeep Reddy Vanga’s own life, as mentioned to us by Shahid during his interview.

As far as the performances go, Shahid Kapoor has outdone himself in the film and he’s played the rebellious, obsessive, impulsive, angry, self destructive character brilliantly. He gets into the skin of the character and plays it with all honesty. His body language and expressions as someone who’s under the influence of alcohol and drugs, to the mischievous younger son and brother of the family, to an obsessive lover is perfect and believable. Shahid also mentioned that this has been one of his most difficult films and we agree because it’s the kind of character only a seasoned actor could have pulled off.

Kiara as the delicate and meek Preeti fits into the role perfectly too. While Arjan Bajwa as Shahid’s elder brother and a responsible son has played his part well. But it’s Soham Majumdar, who plays Shahid’s trusted friend, who is one of the best characters in the film. Soham is a natural and he provides some comic relief.

While the performances are applaud worthy, what I didn’t agree to was the glorifying of obsessive love, the more than required drinking scenes and the repetitive shots of alcohol. The film could send out a wrong message to the youth, especially in the smaller towns where fans idolise stars.But then again, what the film tries to show is how flawed we as human beings can be, the hero of the film is not stereotypically good, strong and perfect we’re so used to seeing in most Hindi films.

The film has some beautiful moments, like the conversation between Kabir and his grandmother. One of my favorite scenes is when the older brother comes to take his estranged brother Kabir back home, Kabir refuses to go with him and the two get into a physical fight like two little kids and then end up drinking together. The emotions between the two brothers in the scene is so natural and almost makes you believe that its for real!

Another scene I loved, was the one when the grandmother passes away and Kabir comes back home when he hears about it. There’s a scene where Kabir walks up to his father (Suresh Oberoi) and consoles him, with his wise words or the scene where Kabir plays his grandmother’s favorite song on an old record player. Shahid’s reaction when one of the people at the funeral calls his dead grandmother a body is so real.The scene is sure to tear you up, so be sure you carry some tissues along!

While there are some beautiful, mushy moments (Just the kinds I like!) between Kabir and Preeti, the film is far from a regular romance. It’s an intense, obsessive and violent kind of love story. The film could have been cut shorter, by doing away with a few repetitive and unnecessary scenes. There are some scenes that have little or absolutely no logic! Like the ease with which a college senior easily walks into a junior classroom and asks a girl to come out with him for practical classes, or the football field where the teachers and college authorities do nothing to stop two young men from almost killing each other.

Besides that, the film is a good one time watch. Definitely watch Kabir Singh for the power packed performances by the actors.