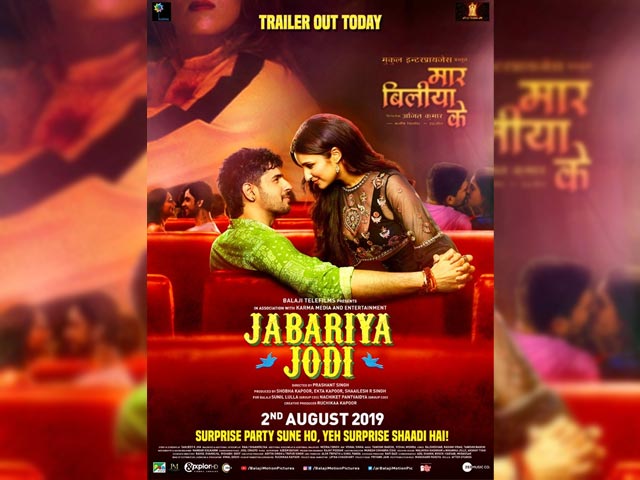 The trailer of Jabariya Jodi starring Sidharth Malhotra and Parineeti Chopra is out and the film looks like a fun ride. Directed by Prashant Singh the story of the film is an interesting one based on the issue of groom kidnapping at gun-point also locally known as ‘jabaria shaadi’ in Bihar! Yes, like Siddhart informed the media at the launch, it still happens in Bihar but not many know about it.

The film seems to be filled with drama and comedy and the trailer too was launched amid much fanfare as Parineeti and Siddharth arrived with a band as well as a baaraat and a tied-up groom! (poor guy!). While Siddharth plays a character called Abhay, who is a local tobacco-chewing goon, Parineeti plays the bold and stubborn Babli. Siddharth abducts grooms and forcefully gets them married, Parineeti abducts Siddharth for the same! A unique concept isn’t it? The film has a quirky vibe to it.

Jabariya Jodi will be Siddharth and Parineeti’s second film together after Hasee Toh Phasee. Speaking about the same Parineeti said that while she and Siddharth had more romantic roles to play in Hasee Toh Phasee, in Jabariya Jodi it’s not the same. “The director would give us instructions like look into each other’s eyes like you are in love, when we were doing Hasee Toh Phasee but in this film, it’s totally different. We are literally fighting with each other. I think after ‘Hasee Toh Phasee our pairing, got so much love as SidNeeti (a name given by fans). So SidNeeti got a lot of love and we wanted to come together with something which will be different from the previous film, ” said Parineeti. Siddharth too added, “I think I haven’t played this kind of role earlier in my career and for Pari (Parineeti) also, it’s a different world and different role,”

Siddharth who was in his element, even went into his character while launching the trailer and told the media in true Bihari accent, “Bachelors soch lo, trailer dekh lo warna shaadi aur shraadh, hum dono karvaate hai.” Talking about learning the Bihari accent Siddharth mentioned, “The team has helped us a lot to get well versed with the language so that audiences could understand it pan-India. Personally I enjoyed playing the role; our only goal was to make a different and fun-filled love story which is relevant as well as belongs to a fantasy world”

Jabariya Jodi has been shot in several locations in north India including Lucknow, Barabanki and Raebareli. Besides Parineeti and Siddharth, the film also stars. While Elli Avram and Alankrita Sahai have special dance numbers in the film.

4 Bollywood Movies We Would Love To See Remake Of