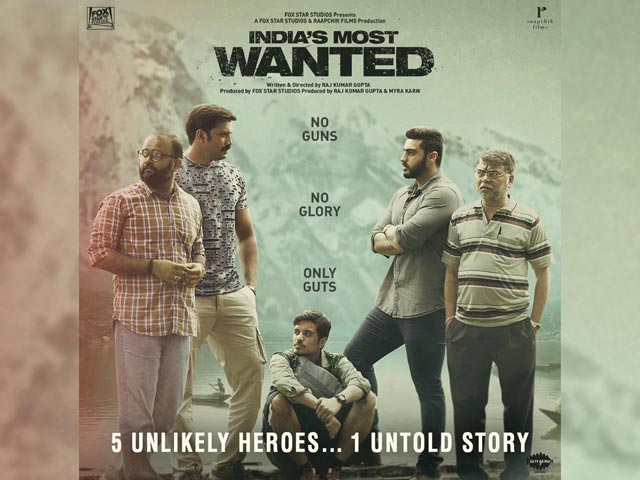 Given the current scenario of political unrest that engulfs the entire nation, we live in a state of constant anxiety and fear because we do not know if we are safe. We are in the dark about the well being of the nation as much as we are in the dark about the fact if the country we call our home will be what home means. In such a situation, it was obvious that B town would uphold this scenario of unrest and tension and bring to us a movie which will pique our curiosity about the cause of the successive blasts and all the atrocious incidents that are taking place.

The trailer of India’s Most Wanted, which was unveiled today, has indeed piqued our curiosity about what the movie is going to be all about. Arjun Kapoor, who had not been seen on the big screen for a while now, took to Twitter to announce the arrival of India’s Most Wanted and we were thrilled to see him in his courageous avatar in the trailer, who would go to any extent to save his country from any danger. He also shared a poster of the film, which came with a tagline “No Guns, No Glory. Only Guts.” And this tagline speaks volumes about the movie and the heart of steel that cast of the film will be portraying.

The trailer weaves the tale of all those heroes who have the guts to lay down their lives for their country. It gives an interesting insight into the movie and Arjun Kapoor is back with a bang. It shows the lives of those heroes whose names should go up in history for they priced the lives of the civilians above their own lives.

India’s Most Wanted has been directed by Raj Kumar Gupta and in the teaser, we come across Arjun Kapoor, who plays the role of Prabhat, going for a quest for India’s Osama, who is responsible for a series of blasts in the city. This is the terrorist who has been wreaking havoc in the city, and Arjun Kapoor and his group will leave no stones unturned to catch this menace. Though the terrorist has been kept nameless, the use of the name India’s Osama in the trailer, does invoke a certain amount of fear in the audience’s mind.

The movie is based on true events and traces a timeline from the year 2007 to 2013, in which fifty two blasts had taken place, which ended up taking the lives of 433 innocent people and left 810 people brutally injured in cities like Hyderabad, Jaipur, Pune, Delhi, and Mumbai. The trailer opens with a man praying and an ominous voice speaking in the background and telling us how the soul never dies. India’s Most wanted has been produced by Raj Kumar Gupta and Myra Karn.

The movie will be a great one and will release on 24th May. Get ready for the spine chilling quest.