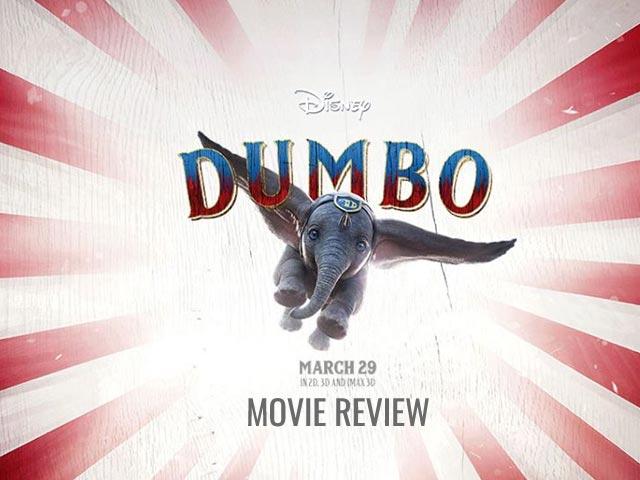 Disney’s Dumbo, is a live action remake of their 1941 animated classic. To begin with, this new one is a longer version of the older animated one. The new Dumbo is a complete reimagining and is a good remake.

The first half establishes the father, Holt (Colin Farrell) who returns from war and is trying to readjust to his new life, with his two young children (Nico Parker and Finley Hobbins). He takes up a job in a failing circus run by Max Medici (Danny DeVito). Their lives take a turn when a baby elephant with extra large ears is born. The baby elephant is called Dumbo by default and he is a special little elephant who has the ability to fly.

Dumbo becomes the talk of the circus and also gets noticed by a scheming rich entrepreneur called V.A. Vandevere, who lures Max Medici to join hands with him in running the circus in his amusement park, Dream Land. It is only later that Max and his team realise that they have been cheated.It is here that they also discover Dumbo’s mother, Mrs Jumbo, chained and kept locked in a cage. Mrs Jumbo had been sold and sent away from Max Medici’s circus as she goes on a rampage while trying to save baby Dumbo from harm.

When V.A.Vandevere discovers that Dumbo is getting distracted because of his mother, he orders to have her killed. That’s when Holt and his children decide to save Mrs Jumbo and also set Dumbo free from the circus.

The film is visually appealing. There are moments in the film that make your heart feel heavy, especially the scene when Mrs Jumbo is imprisoned in a tiny cart with a placard placed outside, that says; ‘Danger Mad Elephant’. Dumbo is separated from his mother and the only way he can be close to her is from behind the bars and the two of them twine their trunks around each other.

The film takes you back to your childhood and makes you feel like a child again. It’s a pleasure to watch the circus on screen, which is something we rarely get to see in real these days. What needs a mention here is the CGI in the film. Dumbo looks every bit real, right from his expressions, to the way he twitches his ears, and the look of fear and sadness in his eyes.

All the actors from Colin Farrell, Eva Green, Danny DeVito, Alan Arkin, Nico Parker, Finley Hobbins to Michael Keaton everyone has given a brilliant performance. Dumbo is a well made retelling and a delightful film that both adults and children are sure to enjoy.

They say, “You’re never too old for a Disney movie”, so go watch Dumbo this weekend and be sure to leave the theater with a happy smile on your face!