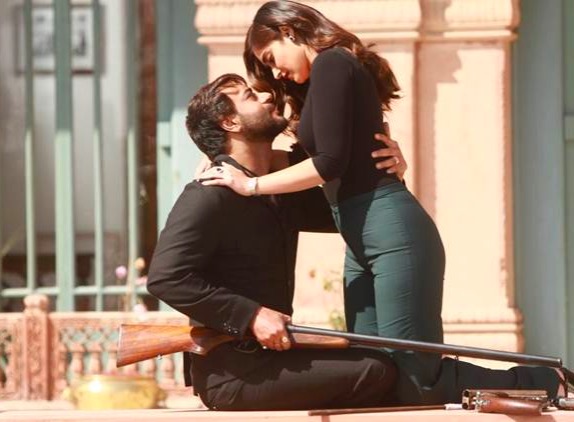 Ajay Devgn starrer, Baadshaho, directed by Milan Luthria hit the theaters today. This heist thriller takes you through the sand filled deserts of Rajasthan set in the emergency era of 1975. The opening of the film is a tad slow even though a lot takes places in the first 10 to 15 minutes, including the arrest of Rani Geetanjali (Illena D’Cruz) but soon catches up pace with the entry of Bhawani Singh aka Ajay Devgn.

Once Bhawani gets together with the other thugs Emraan Hashmi, Sanjay Mishra and Esha Gupta, the real action begins and from then on its action all the way. Ileana D’Cruz as Geetanjali gets a lot of screen space and as compared to her other films she has more to do than just glamour up the screen but somehow my attention is more on the beautiful Rajasthani Leheria saris and jewellery she wears than on her acting skills!

Some characters like the Sanjay Gandhi lookalike went beyond my understanding. Sanjay Mishra was his funny self but the one person who for once has moved away from his serial kisser image and is a delight to watch is Emraan Hashmi. He plays a flamboyant character called Dalia and is adorable when he mouths the Rajasthani accent.

Ajay Devgn of course can’t go wrong when it comes to action and playing the macho man. Esha Gupta tries hard but still needs to polish her acting skills.

Also read: “Working With Ajay Devgn Has Been The Most Humbling Experience For Me”- Sunita Radia

As the film progresses and the climax builds up all you can hear more of are gunshots and it almost feels like Diwali is here! Production value is high which is obvious with a multistarrer and all that blowing up of cars and trucks etc. But what the film lacks is a good story. Though there are a few twists that make you go Oh! Now what?