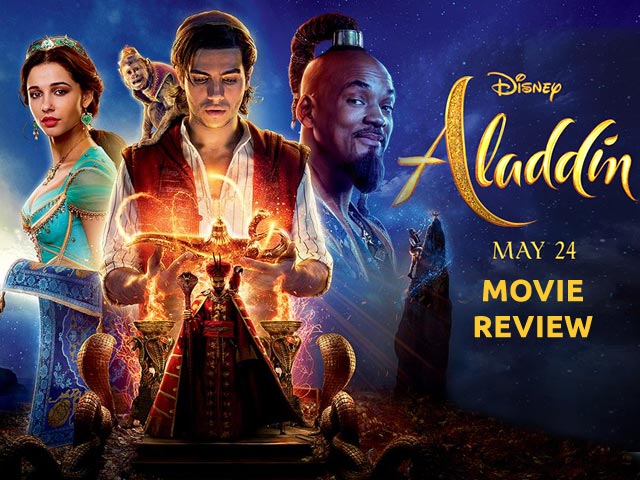 What is it about this story we’ve all grown up reading and watching, that makes it so special. The story about the bond shared by a common man, a genie, a monkey and a magic carpet along with a love story between Aladdin and princess Jasmine is not a new one, it’s been there and been watched in the animation format over and over again. But even though we know the story, Disney’s latest live action adaptation of Aladdin is full of surprises!

Even before the film was released, the film received a lot of criticism, with Will Smith being criticised for the way he looked as the genie, and people even saying that the trailer was underwhelming. BUT the movie is sure to make all those who criticised it and Will Smith’s blueness, eat their words out, and leave them absolutely speechless. The movie is nothing short of a magical adventure and one that you will be immersed in. The second the movie opens, it takes on and how! The movie is a wild ride from start to finish.

Being a huge fan of the original 1992 animated classic featuring the legendary Robin Williams as the Genie and also a die-hard fan of the folklore, and having read the books again and again, I was very excited about the film and especially watching Will Smith as the genie. The movie not only lived up to my expectations but surpassed it!

For those who are not familiar with this folklore, it’s about Aladdin a street rat, who steals for a living and is very good at it. He is spotted by the evil Jafar (Marwan Kenzari), who is Wazir of the Sultan of Agrabah, to retrieve a magic lamp from a cave. Aladdin who is in love with Jasmine(Naiomi Scott), princess of Agrabah agrees to help Jafar. Aladdin does get the magic lamp Aladdin, but Jafar cheats him and Aladdin ends up being the master of the lamp which houses a powerful Genie!

Will Smith as the Genie, keeps the movie charismatic, he’s funny and sassy and warms your heart at the same time. Naiomi looks absolutely stunning head to toe and fits into the character of Jasmine perfectly. Meena Masood as Aladdin is a perfect fit and is 100% Aladdin at every level. His million dollar smile is sure to win a lot of hearts! Marwan as Jafar looks evil and gives you a chill every time he enters the screen.The entire star cast is very strong.

The soundtrack is good, my favorite song in the movie, was the one where Prince Ali makes a grand entry into Agrabah. It’s a typical Bollywood style of dance number, colourful, fun complete with background dancers et all.

The script has a lot of clever interesting changes from the original movie. It also has a few great messages and is very funny in some places. The best comic scene was when Prince Ali meets Princess Jasmine and her father. Everything from the costume design to production design is great.

Disney India invited us to review the movie, so obviously the theater was full of film reviewers and critics but for a moment I guess we all forgot we were adults and went back to our childhood. We were laughing and giggling and cheering.I, for one was singing ‘A Whole New World’ out loud, along with Jasmine and Aladdin while they took the magic carpet ride on screen!

Looks like the makers of the live action Aladdin deliberately made the trailer underwhelming so that they could surprise the fans with an outstanding movie! Well, if that was the plan then they surely have surprised everyone with a brilliant version of Aladdin!

Aladdin is a lot of fun and full of heart and it’s highly recommended for all age groups! Guy Ritchie we need a sequel please!