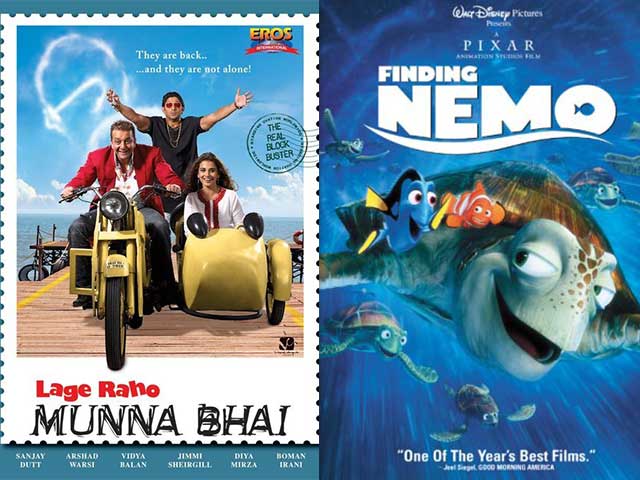 Well would you look at that! The weekend is finally is here! Your plans for the next two nights must have already been fixed, but what are you going to do during daytime? You’ll most probably waste your time trying to figure out which movie to watch. And it won’t help as there are so many films with sad stories out there which will bring you down. Fret not, as we have brought you a list of 11 positive films from Bollywood as well as Hollywood that you can watch during the weekend.

Funny and eye-opening in equal measure, Lage Raho Munna Bhai explores what happens when the forgotten principles of Gandhiji are put into effect in today’s world. It’s a sweet film which you should watch if you want some really enjoyable moments that are enhanced by the brilliant performances by the actors.

When Nemo, the clown fish, gets lost in the vast ocean, his father runs from pillar to post trying to find him. Although it’s a kids movie, there are lessons for adults to be learnt from it as well.

This film deals with the topic of parental abuse, and can get quite sad in some parts. But ultimately, what emerges is the story of an innocent lad – and also a good poet – who escapes the clutches of his abusive father. It’s a highly inspirational film which always resonates with youngsters.

This is a coming of age film which sees protagonist Sanju (Aamir Khan) turn from an irresponsible teenager into a confidant man. Watch it for its hilarious comic sequences, its emotional drama and more importantly, its intense bikes races.

Now this one’s a gem you wouldn’t want to miss. Chhoti Si Baat is an extremely feel-good film which will also leave you reeling with laughter as you watch its protagonist struggle with his self esteem issues. Also watch it to see how beautiful the Mumbai of yesteryears was.

What happens when an incredibly adorable little child and a grumpy old man embark on an adventure of a lifetime? Up will move you from within, and leave you filled with happiness in the end. It’s a terrific movie with lots of funny moments and a feel-good story.

If any Indian film perfectly depicts modern day friendships between people in their late-twenties, it’s Zindagi Milegi Na Dobara. You can watch it alone, or better yet, with your friends by your side.

Amelie is an extremely different film from what we’re used to seeing. It’s a French film which follows the life of the titular character who is both mischievous and highly imaginative at the same time. If you’re in the mood for a feel-good romantic comedy, Amelie is the most apt film for you this weekend.

For cricket lovers, there’s Iqbal, a small yet impactful film about a deaf and mute bowler. Watch it for its inspirational story and the joy you get from seeing the main character triumph against all odds.

When Harry Met Sally could very well be the best romantic comedy ever made. It’s a simple film about how complicated love can be. This is the best movie for you if you’re feeling a little low due to stress from your own relationship.

Here’s wishing you a happy weekend, and here’s hoping these movies will cheer you up.