HotFridayTalks
Home Food Why You Should Include More Edamame In Your Diet? 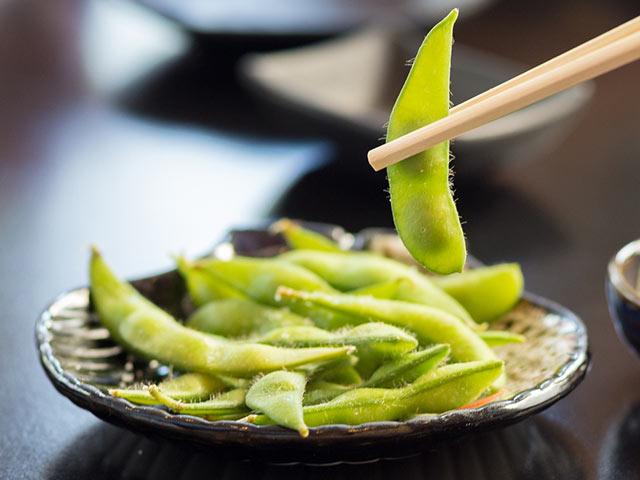 Soybeans are one of the most nutritious and versatile of food crops. However, the Japanese know how to best harness the benefits of any ingredient and hence edamame which are immature soybeans remain the mainstay of their diets. A popular Oriental snack, edamame is now getting traction in the West too given its many benefits.

Edamame are often sold while still cased in their shells. However, they need to be shelled before eaten. Edamame beans are also sold de-shelled and baked ready to be popped as a snack. Since most edamame is sold frozen, the best way to have it is as baked, stir fried, boiled or microwaved. But that’s not the only way you can have edamame, it can also be added to soups, stews, noodles or salads. But besides just being a hip new appetizer to be ordered at high-end Chinese and Japanese eateries, edamame according to nutritionists should be included more often in your diets.

One of the reason why edamame is the hit snack amongst millennials is also because it serves as a good substitute to chicken or other meats. As veganism becomes a growing trend, high protein foods such as edamame are often recommended by lifestyle coaches as one medium cup of edamame gives you 20 gms of protein. They are also packed with amino acids. It is a highly fibrous food and is also rich in minerals and vitamin K, manganese, folate etc.

If you like throwing house parties and your friends include weight watchers and healthy eaters then edamame can be a great party snack to serve. In fact, to add a twist to your menu you can craft the whole food around the theme. Adding other finger foods such as gyoza and stir-fried tofu and entrees such as sushi and yakitori chicken will have your guests marveling at your Japanese party. The good news is that all of these foods are easy to make even though they sound complicated to prepare and serve at home.

Edamame has firmly placed itself in the category of superfoods as it is the only vegetable that contains all the nine essential amino acids. Although edamame is the ancient food of the East, with history of it being eaten in China as early as more than 2000 years ago, it travelled across the world after Japanese discovered it. The West found its benefits and supermarkets in US and Europe began stocking edamame beans as a ready-to-eat snack. Indians began taking note of edamame only after kit became popular in the West. The bean now a mainstay at most mega supermarkets in big cities looks like is here to stay in India.