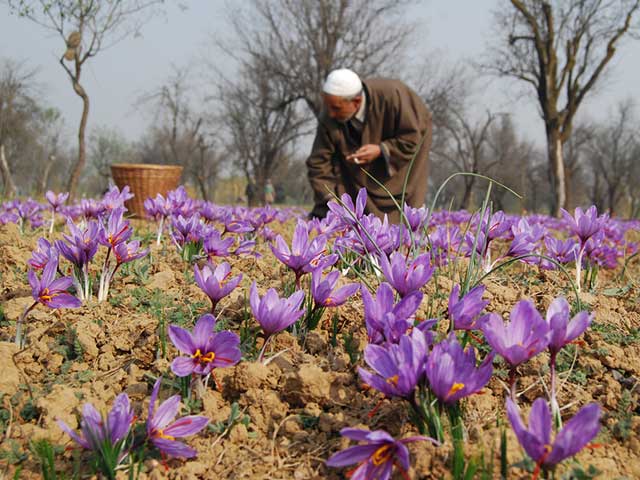 Anybody who visits Srinagar comes back with Kashmiri saffron either for their own use or as gifts for family and friends. Also since we all know that saffron is grown wildly in Kashmir, we think the saffron that is sold there is always pure, but did you know that a lot of fake saffron is also sold in and around Srinagar? So how does one identify the pure from the fake saffron? HFT tells you how:

(Image Credit: u4uvoice.com)
The saffron may be yellow in color but the saffron flower is mauve. It is the red stigma of the mauve flower that is the saffron we know as kesar. There are 3 stigmas in each flower. The name saffron comes from the Arab- Persian word za’faran. It takes about 150 flowers to get a single gram of saffron. No wonder then that the saffron is one of the most expensive spices because of the intensive labor that goes in to grow the crop.

What is fake saffron?

Fake saffron is a way to fool unknowing tourists and it is usually corn husk that is colored to look like saffron. Besides corn husk, anything that looks like saffron thread is used and maybe a few real strands of pure saffron added to fool customers.

How to tell the difference between fake and pure saffron?

There are a few ways to identify the fake saffron from the pure.
1.The first way to tell the difference is the aroma. Fake saffron does not have the aroma. The smell of saffron is a blend of honey and hay smell.

2.The second way is to taste the strand of saffron. If the saffron stand tastes sweet then is fake for sure. Pure saffron always smells sweet but never tastes sweet.

3.When saffron is added to a mix of baking soda and water, the water will turn yellow if the saffron is pure but will turn a dim red if its fake.

4.When pure saffron is soaked in water and then taken out, the color remains the same but if its fake, the so-called saffron stared will lose its color.

(Image Source: kashmirkesarleader.com)
While saffron is sold in almost all places in and around Srinagar, the best place to buy pure saffron in Srinagar is at a store called Dilkash Saffron located at Lethpora road en route to Pahalgam. The owners of this store even give you a guided tour of their saffron farm which is located at Pampore. They also supply saffron to different parts of India and the world.

What Is Planet Friendly Diet All About?