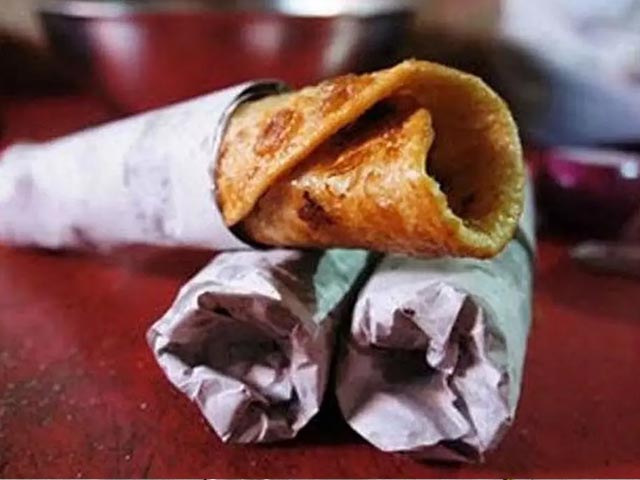 Whenever you hear people discussing the street food in Kolkata the favourite of everyone is generally the Kathi Roll. The roll which is the most heartiest and the most satisfying street food with juicy kebab filling wrapped in layered parathas. This roll was first discovered or prepared at a Mughal eatery known as the Nizam’s thus the name Nizam’s roll which was later called Kathi since the Nizam’s switched from iron skewers to bamboo sticks locally called kathi, used to grill the kebabs. The office going people would find the famous kebabs of this place too greasy and difficult to handle so the kebabs were wrapped inside the parathas and it became an instant hit. Later on other places started their own style of rolls and gave it different names but the Nizam’s Kathi Rolls are still a favourite of many people.

The rolls here are not only tasty and famous but they have the right amount of ingredients and the special masala which is used. There are as many as 30 varieties of rolls like egg, chicken, mutton, liver, prawns and for vegetarians there are paneer, cheese and other variants.

This is another historic eatery where the rolls are of different variants. The chicken tikka roll and the mutton roll are worth trying. The rolls are made without any sauces and the sauces are provided separately. Since this place serves alcohol you can enjoy your roll with some beer.

Another famous joint in Kolkata Hot Kathi Roll is a place which is a favourite among students and office workers and you will find a long queue waiting to have the rolls here. The parathas are deep fried to perfection which makes it juicy and crunchy and then stuffed with various fillings but the double chicken egg roll and the classic mutton roll are must tries.

Jabbrr Afghani has rolls of different varieties and they are well known for the rolls have exotic and exclusive flavors.The cheese rolls and the egg cheese rolls are a hot favourite of the youngsters.

Smokaccino Rolls With No Oil

Smokaccino is famous for its oil free versions of rolls for guiltless snacking. They make the low calorie versions of the kathi rolls with different fillings. For those who are on a diet can eat without feeling guilty here.

Campari’s rolls stand out from other rolls because the meat is marinated and then cooked in the tandoor. The must try item in this place is the tandoori fish roll which has a taste so perfect that you would not like to stop at one.

Next time you are in Kolkata do try these mouthwatering rolls.

Why Fermented Foods Are Becoming Popular