HotFridayTalks
Home Food Have You Heard About The Heart Attack Restaurant? 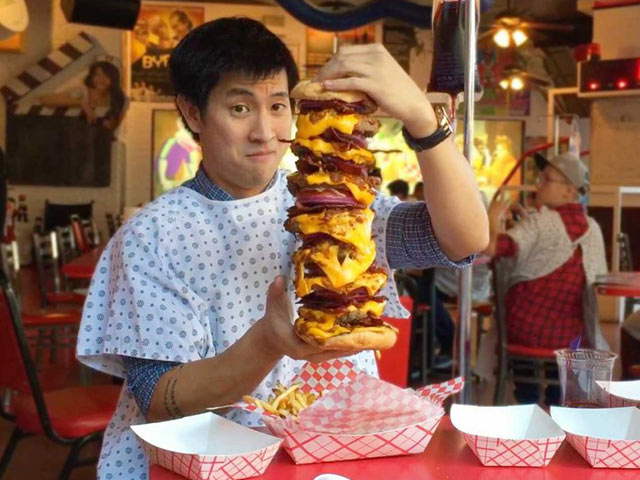 The Heart Attack Restaurant also known as the Heart Attack Grill is an American hamburger restaurant in downtown Las Vegas, Nevada. It was formerly located in Tempe, Arizona. The restaurant made to national headlines with its over-the-top, gluttonous menu that were reason for its customers getting killed.

Unperturbed by this, the owner of Heart Attack Grill, Jon Basso considers these deaths good for his restaurant’s business.

They even take orders in form of prescriptions from the customers who are patients. The patient aka customers are given a hospital gowns and wrist band before they place an order. And customers who don’t finish their orders get a paddling by the nurse tending them.

The menu as mentioned earlier has been made insanely unhealthy with Single, Double, Triple, Quadruple, all the way up to Octuple Bypass hamburgers. These hamburgers have beef stuffing of about 230 to 910 g which means you end up eating 8,000 calories.

The burgers here are dressed with smothering levels of bacon and cheese. This makes them tastier and of course luscious. But the restaurant is actually making them fattier and obnoxiously unhealthy. In fact, the burger having most calories in the world, the Octuple Bypass Burger with 20,000 calories is found at Heart Attack Grill in Las Vegas.

Other ‘unhealthy’ options on the menu include Flatliner Fries that are cooked in pure lard. In drinks you get beer and tequila, and soft drinks such as Jolt and Mexican-bottled Coca-Cola made with cane sugar. Even the drinks here come loaded with extra sugar which makes them extremely unhealthy. The menu also gives an outrageous vegan suggestion – cigarettes. That’s shocking enough for any of us but that’s the theme of the restaurant.

The restaurant is an adventure that you can try once in a while. But if you feel like going often then perhaps it might uphold its name and be instrumental in giving you a heart attack.

Read Also: What Is Cardiac Arrest, How Is It Different From Heart Attack