HotFridayTalks
Home Food Have You Tried All The Different Types Of Biryani ? 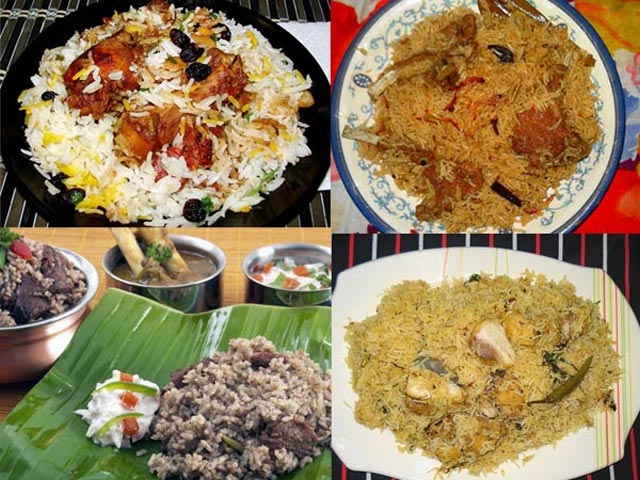 Just a mention of Biryani makes any person hungry and even after your tummy is full, you crave for more, Biryani just does that to you doesn’t it? There are so many varieties of Biryani and it is difficult to decide which one is the best, from the North to the South the style of preparation is different. The flavour and taste is also different in different parts of the country. So let’s check out the various kinds of biryanis.

Combination Of Rice And Hilsa Fish

This is a must try for fish lovers and is unique in taste with the combination of fish and rice. Some prepare it with curd and coconut milk while some with mustard and chillies, the dish is irresistible in both the style of preparation.

Hyderabad is world famous for its Biryanis but did you know that there are two types of Hyderabadi Biryanis? One is Kacchi, which is cooked with both the meat and rice together and Pakki, where the meat and rice are cooked separately, and mixed later. Both are slow cooked in a dough sealed dish, over charcoal with saffron and various other masalas.

Also known as the Awadhi Biryani, this uses less spices and is cooked in the dum style so that the rice soaks in the masala and is very delicious. Did you know that the Lucknowi Biryani was brought to Lucknow by the Moghuls?

The Calcutta or Kolkata Biryani is somewhat similar to the Awadhi style of cooking, but the use of nutmeg with saffron and kewra gives it a different kind of flavour. The addition of potatoes, the yellow colour and use of less spices gives it a unique taste and look.

Malabar Or The Thalassery Biryani

Malabar Biryani or Kerala style Biryani is different, because of the rice and the use of lots of dried fruits. The taste too is unique and unlike most of the other Biryanis you may have tasted. It is a little bit of tangy, mixed with a bit of sweet, spicy and salty taste to it.

Sindhi biryani originated in the Sindh province and it uses a lot of green chillies that are slit along. The Sindhi Biryani also has a generous amount of dry fruits, nuts and spices added to it.It has a rich taste and can be very heavy too!

The Anbur Biryani has a typical South Indian flavour to it . It is made with a lot of curd, dry chilly paste and whole spices. It originated during the regime of the Nawabs of Arcot, hence it is also known as Arcot Biryani. It’s more reddish in colour unlike most other biryanis that have a yellow tinge to it.

The Dindigul Biryani is a popular dish of Chennai. This style of Biryani uses the jeera samba rice along with a generous portion of pepper which gives it a unique peppery taste.

We bet your mouth is already watering! How many varities of Biryani have you tried, write back and let us know.

Why Is Musk Melon, The Ultimate Summer Fruit?