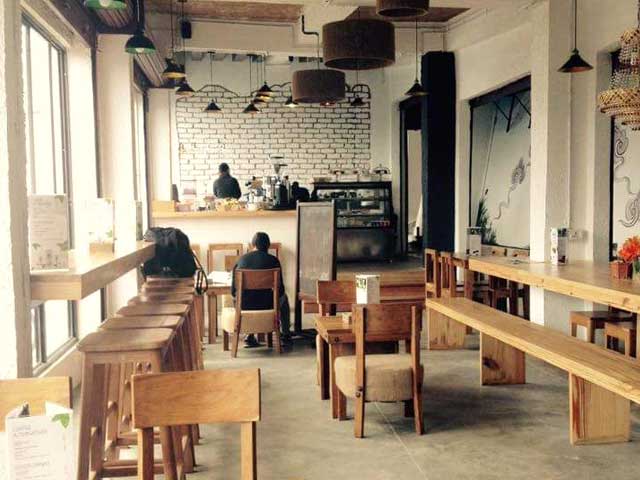 Every tourist who comes back from Darjeeling comes back with pictures taken at two of Darjeeling’s most famous eateries; Glenary’s and Keventers which are world famous. Though no one serves breakfast like Keventers and no one makes the chocolate eclairs, shortbreads, jam tarts, lemon tarts, custard cream pastries and cream rolls like Glenary’s, anywhere else in the world, there are many more places in Darjeeling that serve finger-licking food and are a must explore.

Having been raised in this beautiful, friendly small town, there are some places that define Darjeeling, the eateries I’ve listed above and below are synonymous with Darjeeling. None of my trips back home are complete without visiting each one of them during my stay at home. Most of these places are not only pocket-friendly but serve the best local delicacies you wouldn’t regret trying.

Chopsticks tops my list of favourites! They make the most insanely delicious pork spare ribs and schezwan momos. Don’t forget to carry back some of the delicious Chinese sausages they make. I always tend to overeat here. It’s one of the oldest restaurants in town and has a long history since 1952. They serve Himalayan Chinese food fondly named Himchi by the locals. It’s located in the heart of Darjeeling and it’s very difficult to miss it (Make sure you don’t!)

If you want to start your day with a scrumptious breakfast then the Himalayan Java Cafe is the place to go to. They also serve a very special kind of coffee that is grown in Nepal. Even though Darjeeling is known for the tea grown there, the coffee at the Himalayan Java Cafe is out of the world and a must try. Dr. Devendra who is one of the leading pathologists in the town is a regular at the cafe and swears by their coffee. Speaking to HFT he said, “I’ve never tasted coffee as good as the ones served here anywhere else.”

The Kathmandu Kitchen serves authentic Nepalese food. The food served here is the typical local food that most of the Nepalese population in Darjeeling eat every day. The sekwas which is smoked mutton or chicken marinated with lemon and spices, the Nepali thali and Momochas are to die for! Gautam Shrestha manager at Adventures Unlimited India, and also a travel enthusiast highly recommends the Kathmandu Kitchen’s mutton sekwa and the Nepali thali.

One of the oldest and most popular and pocket-friendly places in town is Penang. They serve the best clear soup with chicken, pork and mutton momos. No matter where I eat momos nothing tastes as great as the ones Penang makes. Their thukpa and chowmein are equally appetizing. Their steaming hot momos and thukpa always made those gloomy cold wintry days warm and cheerful. Run by a very enterprising lady, Nirmala, the restaurant started as a small cozy joint and now they have a full-fledged restaurant that serve not only momos and Chinese food but also yummy Nepali thali.Speaking to HFT, Nirmala said, “We have expanded our menu and all those who are regular at our restaurant are happy with it, since we’ve started serving Nepali thali too.”

Dekevas has only about 5 tables but is one of the favorites of all the locals and a favorite hangout for the college crowd.I have many fond memories of this cozy little place too.They specialize in authentic Tibetan food but also serve regular breakfast and are the first ones to have introduced Pizza to Darjeeling. The potato with phing and mushrooms, fried and steamed chicken momos and shapaley are highly recommended.

Kunga specializes in delicious Tibetan food and is run by a family. While the lady of the house cooks herself in their clean open kitchen, the father and kids take care of the cash counter. Like Dekevas, Kunga too serves authentic Tibetan food loved by both foreign tourists and locals. I would recommend the pork shapta, thentuk soup and fried chicken momos and tingmos. During the shoot of Barfi, Ranbir Kapoor was a regular at Kunga.

All those who have been raised in Darjeeling have grown up on a staple diet of the Aloo dum at Bhola’s! One of the oldest food joints in the town, the place was started in around 1929 and even though the original owner, Bhola, who came to Darjeeling from Uttar Pradesh, passed away in 1991, his four sons have the aloo dum legacy alive! He originally started by selling the most deliciously spicy aloo dum named ‘Bhola ko Aloo’ by the locals. The aloo dum with thick gravy is served with crispy bhujia and tangy tamarind chutney for those who liked that sweet tangy taste in their aloo dum. The tiny eatery has not only expanded in size but has 2 smaller branches at different areas in Darjeeling. Their menu today includes vegetable momos too.

Another small joint started by a man who moved to Darjeeling from Uttar Pradesh, Benis Cafe is the place to go to for your staple Indian style snacks like samosa, pakoras, along with garam chai. Benis too serves the Aloo Dum with bhujia but their taste and consistency of the gravy is completely different from Bholas. Benis also adds fried corn known as ‘makai’ and potato chips to their aloo dum. Both the places have their own distinct tastes.

While it’s been a torture for me writing this article because I cannot help salivating and missing home as I write it, I hope you try out all these local delicacies when in Darjeeling. And once you do, please leave your comments below!

Tried These Varieties Of Halwa Yet?