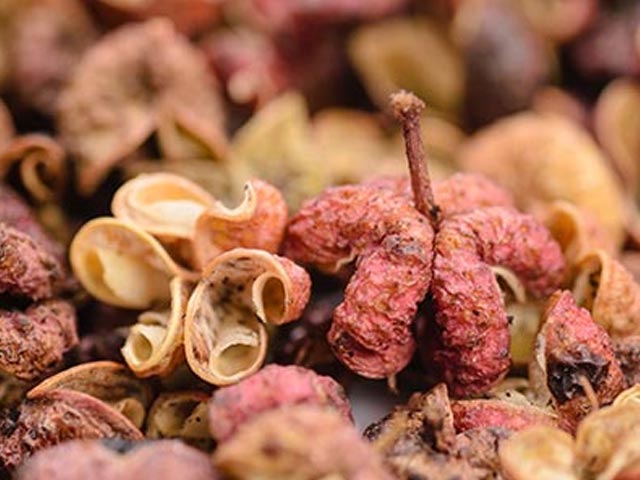 Intensely spicy but fruity, with an aroma like lavender, and a numbing effect around your lips when you eat it, the Sichuan or Szechuan peppercorns are heaven for chili lovers. A staple in Chinese cooking, and a key ingredient of the famous Chinese ‘five spice’, these peppercorns are truly a unique culinary experience.

What Exactly Is The Szechuan Peppercorn?

The Szechuan peppercorn is a common Chinese spice derived from at least two species of the genus Zathxylum, which is a part of the citrus family. Despite its name, the Szechuan peppercorn doesn’t have any flavor like the white or black peppercorn or even the chilli pepper. The plants are usually prickly ash shrubs, and the pinkish-red outer husks are actually used in cooking.

What Is The Flavor Of Szechuan Pepper?

The flavor of Szechuan pepper is isn’t peppery or doesn’t have a lot of chillies. It has a slightly fruity tinge to it, and has some lemony overtunes. It creates a slight numbness in the mouth, and that makes its spice intense.

How Is The Szechuan Pepper Used?

The name Sichuan comes from the Northern Chinese province of the same name. The Szechuan pepper is commonly used in Chinese, Japanese and Himalayan cuisine. It is fairly uncommon in the West, but is gradually gaining popularity.

It is used not only for medicines, but also in tobacco pipes in Japan. The Japanese also use it to make mortar and pestles which impart some flavor to the substances that are ground. The Szechuan pepper is commonly used in famous Chinese dishes like kung pao chicken, Szechuan beef, bang bang chicken and dan dan noodles. Szechuan oil and salt are also used as condiments with the dishes.

What Are The Health Benefits Of Szechuan Pepper?

Szechuan pepper is very healthy and has numerous health benefits. Some of them are:

So, when are you trying this unique spice?