HotFridayTalks
Home Culture “You Don’t Need A Uterus To Be A Mother,” Says Gauri Sawant 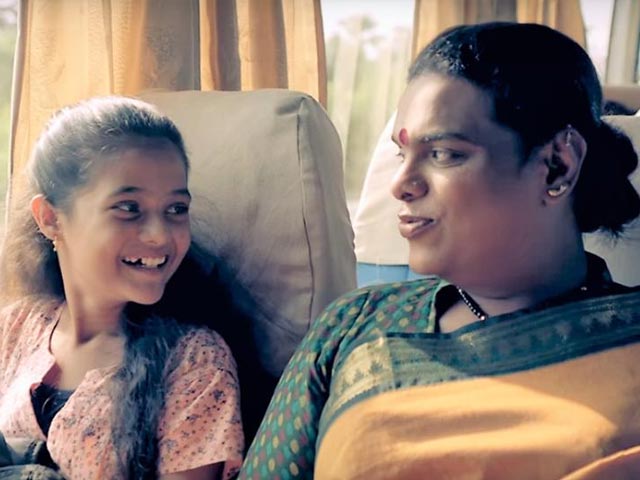 This has been one of my most favorite interviews this year. Not only a favorite, but such an honor to interview this bold, brave, loving and extremely warm mother. Gauri Sawant is like any other mother, we share notes about raising young teens and all the challenges that we as mothers face. She laughs when she talks about the usual teen arguments she has with her 16 year old daughter Gayatri.

But what sets Gauri apart is the fact that she has immense courage and has fought all odds most of her life. She gave a home and also her heart to a little orphaned girl and loved and nutured her like any mother would, inspite of knowing the difficulties she would face as a transgender. The sad part is that even though she is as much a woman as any of us, she will never be accepted by society as a mother.

“Society has not accepted us, the way we should be accepted like any other citizen of India. But before society accepting us, we have to accept ourselves first. We think we are women, but our body is something else so it is important to get over that fight within ourselves,” says Gauri. Besides being brave, Gauri is full of wisdom and that’s perhaps why the Election Commission of India appointed her, as one of the 12 election ambassadors from Maharashtra, making her the first transgender election ambassador in India.

Gauri has won various awards, is well known for her philanthropic work and has also been a speaker at TedX but these things don’t give her as much pride as being a mom to Gayatri. The minute you start speaking about Gayatri, there is a smile and glow on her face and there’s no stopping her from gushing about her little girl, like every proud mother. “Gayatri has completed the woman in me, she has taught me how to be a mother and how to love,” says Gauri.Gauri adopted Gayatri after she was left orphaned post her biological mother’s death, when she was only five years old. Gauri says that at first she was unsure what she would do with the child, how she would bring her up but once she brought Gayatri home, there was no looking back for Gauri. She raised and nurtured her and the two adopted each other as mother and daughter. Gauri says, “Motherhood has no gender. You don’t need a uterus to be a mother. Anyone can be a mother, a mother could be a man, a woman, a transgender. Just about anyone can be a mother, the only requirement is to love someone unconditionally.”

Gauri tells me how loving and sensitive Gayatri is. She goes on to tell us a special memory from Gayatri’s childhood, a memory that is very close to her heart. “On one of my birthdays, Gayatri who was around seven years old, saw that everyone was getting me gifts. She took out whatever money she had saved in her piggy bank and bought me a chocolate. She wanted to surprise me so she put the chocolate in the refrigerator, but unfortunately someone ate it up. When she found the chocolate missing, she was heartbroken and she cried so much. But the whole thought that went behind it was so heartwarming and touching.

Gayatri, who is all of sixteen now, studies in a boarding school and aspires to become a police officer. “When she was little, she wanted to be a teacher, like most little girls, but now she says she wants to be a police officer. Whatever she wants to become, she will always have my support,” adds Gauri. I ask her if she ever had to face any difficulties in school or during admissions. She says, “The school has been supportive, though initially when she was studying here it was difficult. I don’t attend her parent teacher meets etc. one of my friends does that for me.”

Dealing with a teenager requires a lot of patience and Gauri agrees to that. “Now that she is a teen, it does get challenging. Like I tell her to wear a salwaar kameez but she prefers skirts or jeans ( Laughs). But that is normal, I let her wear what she likes but sometimes being a mother, I just worry.”

She narrates another incident when Gayatri started her periods. “Gayatri was in the toilet and I was cooking for her, she called out to me and I rushed to see what was wrong. She had started her periods and I didn’t know what to do, so I called my friends and they helped me to teach her all about periods.”

Now that Gayatri is older, Gauri is concentrating on building Nani Ka Ghar, her home for the orphans, kids of HIV positive people and also the old transgender women, who have little or no support. S[eaking about the same, Gauri says, “Nani Ka Ghar, is a home I am building for them. Nani ka ghar or Nani’s home always reminds us of love and comfort and that’s exactly what this home will be for the children and the old women. These women take an active part in raising the kids in the home, from bathing them to giving them a massage and feeding them their food, etc.”

Gauri feels, motherhood has changed her in a lot of ways, from being a carefree, bindaas person, who would not bother about the way she dressed or spoke or flirted with men, she suddenly changed once she became Gayatri’s mother. “I was suddenly more careful about the way I dressed, I started covering myself with a dupatta. Stopped my wayward ways and became more aware of how to conduct myself, because I had a daughter who I was bringing up and who looked up to me,” says Gauri. We’re sure Gayatri will make her mother very proud someday!

When I ask her what message she would like to give all mothers across the world, this Mother’s Day, Gauri says, “I would like to tell all moms to take care of their health first, take good care of themselves so that they are always healthy and fit for the sake of their children. Our responsibilities as mothers don’t end once our kids grow up, our responsibilities are for a lifetime, because for any mother their kids never grow up. They will always be their little children all their life! So before we think of taking care of our kids and the rest of the family, we should love ourselves and take care of ourselves first, because a healthy happy mother means a healthy happy child too!”

That’s true! This Mother’s Day take Gauri’s advice and put yourself first. Happy Mother’s Day to all the mothers, young, old, new and on those on the way to becoming one!

How To Kick Stress’ Butt As A Couple?