HotFridayTalks
Home Culture What Did Melania Trump Mean By Her Jacket? 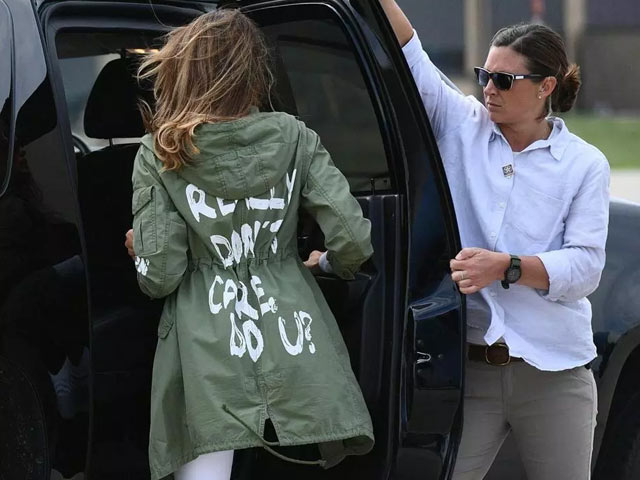 Many activists and reporters had reacted strongly to Donald Trump’s decision to split up immigrant families. Infants and toddlers were separated from their family and kept in detention centres. It was against this strong rejection, that Trump gave up the idea.

But when the fundamental principle is evil, it cannot hide the malice. Melania Trump is turning out to be the worst American first lady. She has been berated for wearing a Zara jacket that reads ‘I Really Don’t Care. Do U?’ on the back when she was visiting these children’s detention centre in Texas. She was on a surprise trip to the US border with Mexico to learn about the plight of migrant children held in a shelter there.

It was a disastrous moment, the lowest point of callousness of the present fascist and racist regime. Last week, Trump announced he would end that policy, but left out any concrete plans to reunite the thousands of children who have already been separated from their families.

A former fashion model, how can Melania Trump be so careless about her wardrobe. Political figures are watched closely for their conduct and wardrobe. They often have specialist helping them with such choices. It is indeed difficult to believe that Melania wore the jacket as a whim, with no ulterior message.

The first lady’s communications director, Stephanie Grisham, claimed that there was no hidden message behind the graffiti scrawl on the $39 Zara coat. If that was so, why did Trump tweet soon after that the message was meant against fake news about him. It surely feels like the White House went into an uncoordinated fire fighting mode after her jacket made news.

“I REALLY DON’T CARE, DO U?” written on the back of Melania’s jacket, refers to the Fake News Media. Melania has learned how dishonest they are, and she truly no longer cares!

It is not the first time that Melania’s wardrobe choices have caused some chagrin. Last August, a pair of Mrs. Trump’s signature spike heels earned her a round of bafflement as she boarded Air Force One bound for Texas to tour devastation after Hurricane Harvey. She had changed into white sneakers by the time she and the president landed.

The White House should realise that they are public servants. What they do is watched by the world. Such goofs-ups only reiterate that they are not serious about their words, and ruling a regime of hypocrisy.