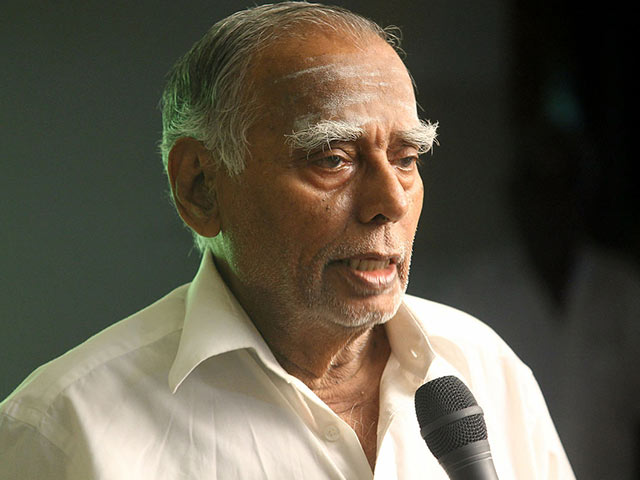 The London High Court described Dr Nagaswamy as being “an unequalled expert in Chola bronzes,” during a trial. The judge, who had no knowledge of Indian art when the trial began, became an expert in it by the time the hearing was completed. It was all because of Nagaswamy’s deposition before the court as witness which was full of erudition in the subject. In 1986 a case was filed in the London High Court to bring back a rare bronze Nataraja statue which had been smuggled into England. The judge was impressed with Nagaswamy’s evidence and he kept interacting with Nagaswamy throughout the trial, asking leading questions and seeking clarifications. Eventually the Nataraja statue returned to Tamil Nadu in 1990.

A postgraduate in Sanskrit language and literature Nagaswamy has a Ph.D. in Indian Arts. Art, Archaeology, Architecture, Literature, Epigraphy, Palaeography, Numismatics, Temple rituals and philosophy, Ancient law and society, Music, Dance and South Asian Art are his fields of speciality. He was the curator for Art and Archaeology, Madras Museum, later he joined the Tamil Nadu’s Department of Archaeology as Assistant Special Officer. He was the first Director of Archaeology of the Tamil Nadu State and he served in the post till his retirement in 1988.

Nagaswamy made archaeology a popular and interesting subject among children. He published pocket-book guides on archaeology especially for them. In an innovative move he involved several thousands of school and college students in cleaning and preserving historical places and monuments in close proximity to them. He brought out popular guides in the form of newspapers to popularise monuments and those guides were priced at ten paise per copy.

He was instrumental in preserving a number of historic monuments like the first century Chera inscriptions at Pugalur, the palace site of the the Imperial Cholas in Gangai-konda-cholapuram, the famous 17th century Thirumalai Nayak palace in Madurai and the 17th century Danish Fort at Tranquebar. He was a pioneer in carrying out undersea archaeological surveys, he did it first off the coast of Poompuhar in Tamil Nadu.

He popularised art and archaeology through dance and music at archaeological sites and monuments like in Gangai-konda-cholapuram, Madurai, Darasuram and so on. He himself composed many dance dramas on historic themes like the life of Rajaraja chola, Rajendra chola, Manimekhalai, Arunagirinathar, Appar and others, and presented them in different parts of India and in abroad like Germany, Sweden, U.K, Canada and USA.

Nagaswamy has been honoured by various organisations for his contribution to Tamil Archaeology, among which the award of Kalaimamani by the Government of Tamil Nadu deserves special mention, but recognition at higher level was long overdue. Now, in a fitting tribute to his service in the fields of art and archaeology government of India has awarded the nation’s third highest civilian award, the Padma Bhushan, to him.

What Does It Mean To Be A Metrosexual Man?