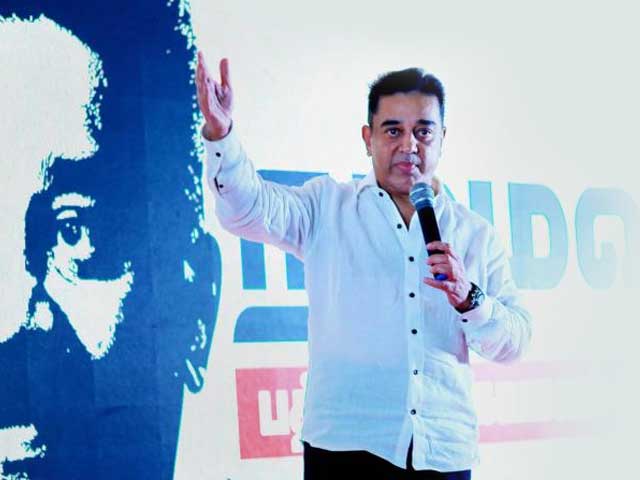 “My party’s name is Makkal Neethi Meyam,” said Kamal Hassan, to loud cheers from the crowd of over 15,000 people at Tamil Nadu’s political capital of Madurai. Another upstart politician Arvind Kejriwal shared the stage with him, and Kerala CM Pinarayi Vijayan sent a congratulatory message on video.

Kamal Hassan also waved the flag of his party. It has six hands representing the six southern states. The star in the middle with six pointers represent truth, people and justice, according to Hassan.

Colours black and white has a political significance in Tamil Nadu which forms part of the flags of the two big parties of the state—AIADMK and DMK—and the shades are also seen as a pointer to the Dravidian ideology.

Hassan said he has no ‘isms’ in mind but the welfare of people. Pushing for ideas to improve the service sectors and essential services for people, Hassan said his guilt feeling also had a role to play in his political journey. He felt guilty that the audience had to pay money to watch his films, money that would come to him as his salary. Now he feels it is his turn to give back to the society, and hence his step towards politics.

Hassan said his plans to adopt eight villages in Tamil Nadu in the initial stage was a decision to begin that service for the people. Without naming any party, he took on political outfits that bribe voters.

But the other faces of the party remain unknown; those running his fan associations in districts, and a few lawyers. APJ Abdul Kalam’s relatives had also shown an interest in joining his party.

Haasan started his roadshow from Rameswaram on Wednesday morning and had at least three public meetings on way to Madurai. After visiting late President Kalam’s elder brother Mohammed Muthu Meera Lebbai Maraicker in the morning, he arrived in Madurai to launch his party.

After this great start, Kamal Hassan may be on the way to create a great political career, and bring in positive changes in a state facing a political turmoil after the demise of Jayalalitha. Though his detractors hint at his marginalised following, one can never know how political stories play out.

Read Also: The Political Avatar Of Rajinikanth And Kamal Haasan

Here’s Why The Youth Are Loving The Telecom Revolution