HotFridayTalks
Home Culture Guess What The Swiss Are Doing To Protect Their Glaciers? 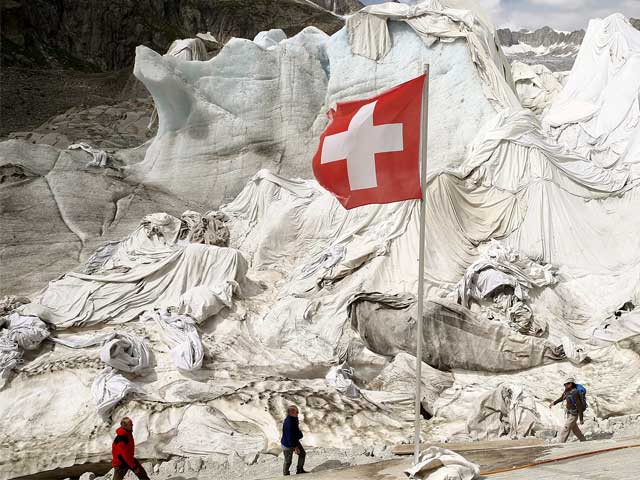 The summer brings a new job to those living in the beautiful Swiss Alps. They bring out their white canvas blankets to cover the Rhone glacier. It is intended to reflect sunlight off the glacier, to try to reduce how much of it disappears each year.

The Rhone Glacier is a popular tourist destination that has been shrinking rapidly over the last decade due to rising temperatures of the global warming. Of the roughly 1,148 feet in ice thickness lost since 1856, 131 ft has disappeared in the last 10 years alone.

This is not a new approach. People in Italy and Germany also cover their glaciers with reflective material. Others have suggested even larger-scale interventions, like using wind-powered pumps to squirt sea water over Arctic sea ice in winter, prompting thicker ice to form. Scientists have also floated the idea of building artificial platform-like mounds underwater to prop up particularly vulnerable ice sheets from below.

While all these ideas by geo-engineers may seem inspiring and innovative, they are a tragic reminder that humans are harming the planet. International efforts like the Paris Summit on Climate Change are getting embroiled in politics, and political leveraging instead of actually protecting the environment.

And there is little wisdom in blaming the governments when laymen are also responsible for polluting the environment. How often do trekkers to the Himalayas encounter plastic waste in their trails. Many of them have started doing their bit by coming back with gunny sacks full of garbage. While these little efforts may be praiseworthy, they are not enough to reverse climate change.

It is more compelling efforts like the recent ban on plastic by the Maharashtra government that might actually bring about change. But that too depends on the rigour of its implementation. As we waltz through our daily lives, with little care for the environment, it would be tragic to come to a point where we are leaving behind a legacy of pollution and damage for the future generations.

Read Also: We Are Not Alone, Even Emperor Penguins Of South Pole Can’t Resist Taking Selfies!

Section 377, A Mixed Bag Of Archaic Rules And Modern Relevance