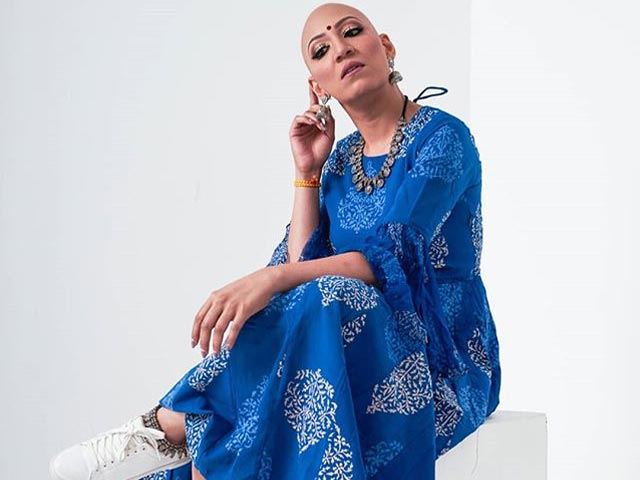 Beauty standards, especially for women have always very singular and strict in any society of any age. You can be beautiful only if you possess this one set of features that are defined as the “ideal” or you can’t. There is almost never a space for inclusivity. This is why anything queer in the body has led to a desperate attempt to hide- with makeup, wigs, surgeries and recently, filters! All these expectations regarding outside beauty double for a woman when she becomes a bride. Suddenly this important day of her life is less about celebration and more about looking flawless for the prying eyes of the guests and the lens of the flashing cameras. But from time to time, women do dare to shake it all off and stand before the world just as they are, with a stance that screams “I woke up like this” and lord, does the world watch in awe.

Navi Indran Pillai is one of those so
called “rebels”, who has quickly become viral for her bridal photoshoot. Vashnavi Poovanedran, better known as Navi Indran Pillai on instagram, is a Malaysian of Indian descent and has survived cancer. But she refuses to let that disease and the toll it took on her body to stop her from thriving both mentally and physically. Her photo series for her wedding, ‘The Bold Indian Bride’ has not only shaken up the whole ‘shy bride’ cliché, but has also inspired and empowered many through Poovanedran’s choice to pose for those photos with a shaved head and full ornaments- traditional headpiece included.

In a series of posts, she spoke how cancer takes away so much of self-confidence and people do not feel beautiful anymore, especially after losing hair due to the radiation therapies. Posing with a shaved head and no compromises made on the extravagant bridal attire, Vashnavi has made several points with her pictures- she is not ashamed of the way she looks, she does not try to conceal the fact that her head is shaved, and she does not feel any less beautiful because she is hairless; if anything, in the pictures what outdoes her big fat Indian bridal look is how unapologetically she wears her own self.

Hello world! That’s a new me with the old self! Was getting tired of the extensions, so this is how it is and it’s so liberating in every sense of the word, so much so that I don’t have to duck the shower while bathing or while picking up the soap! I never thought I would go bald, was stretching my time with the good ol’ cap for too long. But this feels so good❤️ #breastcancerawareness #baldisbeautiful #selflovenomatterwhat

Vashnavi’s bridal photoshoot is a step forward into the direction of what many other women public figures, who have fought or are fighting their way through cancer have been doing for a while now. Women like Manisha Koirala, Lisa Ray, Sonali Bendre, Tahira Kashyap have put up their shaved heads on public pictures, showing nothing but confidence in them. All these efforts towards normalizing something that is otherwise considered not beautiful is not only a right step in the direction of self-image and self-acceptance, but also something very potent to make cancer one pain less intense for its survivors and fighters.

Why Is New Zealand In Love With A Drunk Bird