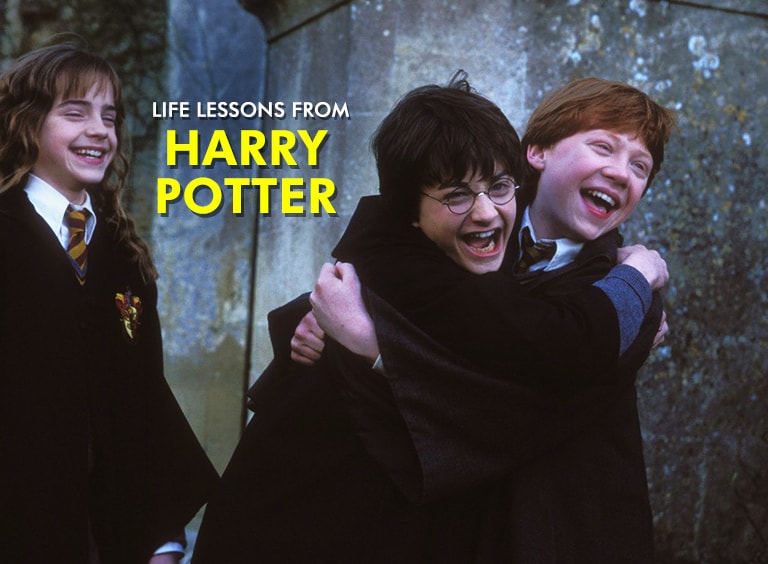 J.K.Rowling is going to release 2 new books on Harry Potter this October. And the fans are super excited as the magic is never enough. Some of us must have read the books more than once, and some of us must be watching Harry Potter movies on marathon. The world she has created at Hogwarts continues to live on within our minds and hearts.

Here are 7 reasons explaining the fan following and the lessons we have learnt from the Harry Potter series.

Though they met in unlikely circumstances, Harry, Ron and Hermoine have faced many challenges together and defended each other on a regular basis. They have defeated dementors, Dolores Umbridge and Horcruxes. Apart from these dangers, they tackled teenage problems like all of us, relating to jealousy, crushes, bad teachers and school exams. With such friends, it is ok to goof up sometimes as they will always have your back.

All problems including Voldemort can be tackled if you have the guts to face them. Whether it is Neville standing up against his own friends for the honour of the Gryffindor house or Hermoine fighting for a cause she believe in like SPEW for the house elves, or little Dobby trying to save Harry Potter, courage can get you through anything.

People who seem bitter can surprise you sometimes. Whether it is the “always” love of Snape for Lily Potter or the quivering Quirrell who turns out to be harbouring Voldemort in his turban, people change. That is life. Be prepared for surprises.

4. Happiness is not about money

Ron’s household is an exemplar of perfect families. Even with little, Arthur Weasley and his wife stand by their principles, welcome people into their home and do the best to nurture their kids. They are filled with love for Harry and his supporters. While the rich Malfoys are always bitter and have to sneak away in the end to protect themselves.

When Harry won the cup and was transported to the cemetery to face Voldemort alone or when he created the Patronus to save himself and Dudley, he makes you realize, that despite all the love and support, some battles have to be fought alone. Even when Snape teaches Harry Occlumency, we realize that the special connect between Harry and Voldemort, and his burning scar means that ultimately Harry is alone in the battle.

6. You have to choose to be good

The story is one of the victories of good over evil. Harry Potter himself claims that they will win because they have something worth fighting for. Sirius teaches the greatest lesson when he explains to Harry in the Order of the Pheonix that all of us are shades of grey, but ultimately it is what we chose to act on that decides our character.

7. Love is the greatest weapon

Harry is protected from Voldemort because of the sacrifice of his mother. Even in the most adverse conditions, Hermoine and Ron are able to express their love. Ginny and Harry realize their love after many years, even though they are meant for each other. And Snape’s love for Lily Potter has given more credit to the Half-Blood Prince than any other character. Voldemort is ultimately defeated not by magic, but by those who love Harry.

All books teach us something. Harry Potter has become a part of childhood for many, and we continue to draw inspiration. No doubt, the readers are excited about the two new books from the author.