Nothing sells like jingoism in our country. And it is on this ticket that Salman’s Tubelight has a chance to sell well, apart from the added benefit of being an Eid release. There is a good chance that fans will be queuing up outside theatres on the festival day to watch the story of Laxman (played by Salman) as he rescues his army brother (played by Sohail Khan) who has been captured by the Chinese.

The film is set in Ladakh amidst the background of Indo – China war of 1962, but is obviously expected to be a humane drama, rather than a political portrayal of as things were. Unsurprisingly the film is being awaited with excitement as the Salman Khan – Kabir Khan duo has delivered hits like “Ek Tha Tiger” and “Bajrangi Bhaijan”. Though some are worried as the brother duo of Salman and Sohail have disappointed audiences previously with movies like “God Tussi Great Ho”.

Some have also commented that the film is inspired by the Hollywood film “Little Boy”, but the defining difference could be that “Little Boy” showed the father – son bond, whereas Tubelight  showcases the emotional connect between brothers. Even the names Bharat (Sohail) and Laxman (Salman) seem to compel grounded family values among the audience.

Another feature to attract audience is the casting of popular Chinese actress Zhu Zhu. After the special screening for fans, selected through a contest, the excitement for the film has reached a heightened fervor and the switch has been turned on for this year’s brightest Tubelight. 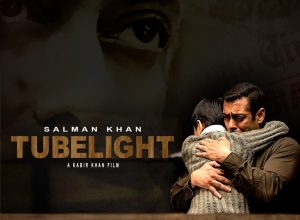