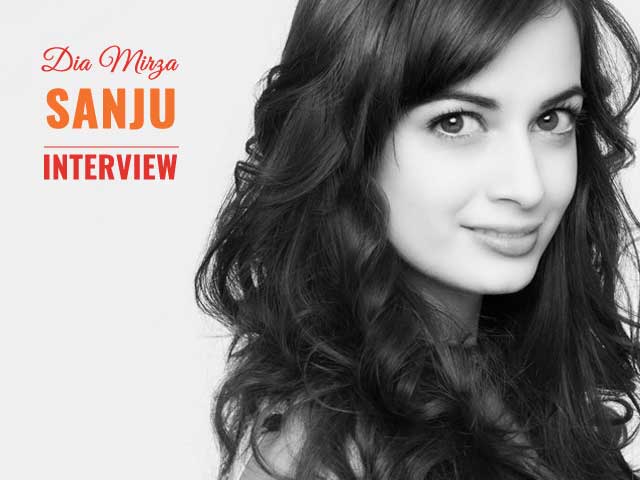 The beautiful Dia Mirza made her debut with Rehnaa Hai Terre Dil Mein opposite R. Madhavan, she went on to do many films post that and today runs her own production company, Born Free Entertainment. But Dia says every day she learns from some of the people she meets at work.

In an exclusive interview with HotFridayTalks.com, Dia shares all that she learnt from director Rajkumar Hirani and her co-star Ranbir Kapoor while working on her upcoming film Sanju, based on the life of actor Sanjay Dutt. Dia plays Sanjay’s wife Manyata in the film.

This is the third film that Dia is working on with Rajkumar Hirani. Dia has earlier worked with Hirani in Lage Raho Munnabhai and Parineeti. She says that even after all these years and the amount of success and fame that he has seen, Hirani remains the same simple person he was when she first met him. She says,“ Nothing has changed, Raju Sir is the same. I don’t know how it is possible for a person to see the kind of success he has seen, the kind of life changes he’s seen but yet be so grounded and so normal. He is exactly the way he was when I first met him absolutely no change!”

Dia also says that Hirani was the first director who made her feel respected. “He was the first director to give me the opportunity to voice my opinions when we are at workshops or explore the scenes or discuss the characters and the situations. He was so open and receptive too whether it was Boman or me or Arshad and Vidya, with everyone basically. Which is so amazing at that time it was a very great experience because I had not worked with those kinds of filmmakers I had worked mostly with people who tell one what needs to be done,” says Dia.

She says that Hirani gave his actors time before they get to set as that time is actually critical time of preparation and understanding the script. Hirani she says is also one of those few directors who gives his actors the opportunity to read the full script. Dia adds, “Up until then directors only gave me one line descriptions and then when I went back to work after a working with him, I was kind of spoilt and I use to feel why the other directors couldn’t be like him. But then I worked with Reema and Sanjay Gupta who were like him and suddenly the kind of work that I did and the kind of directors I worked with also changed.”

What Dia learned from Hirani and promised herself when she started her own production company was to create an environment of inclusivity. An environment where there is no hierarchy, an environment that would bring the technicians and the cast together as one. All actors regardless of whether they were junior artists or the main leads would know exactly what was happening in the film and why they were there. Dia says that Hirani almost came like a messiah for her when she was going through a dry spell and not getting the kind of roles she was excited about.

Speaking about Sanjay Dutt’s wife Manyata, whom she plays in the film, Dia says that she has a immense respect for Manyata. She says, “Manyata has been the most solid part in Sanjay’s life and that is unquestionable. She stood by him, with him through the most challenging period of his life. For any human being to see the days she has takes a lot of courage. She bore his children and raised them singlehandedly. it’s nothing but big respect for her.”

From Ranbir Kapoor her co-star who plays Sanjay Dutt in Sanju, Dia says she learnt to be calm.“He is such an incredibly talented actor but the most endearing and wonderful quality about him is his temperament. I am yet to meet a more grounded, normal and simple person on a film set. He would sit for his prosthetics for almost five hours, come out in the scorching heat, he would be sweating and uncomfortable, there are people all around on the set but not once did I see him become agitated or irritable. He was always in the Zen moment always. You could say a bodhisattva… like he meditates or something or he was born meditating from his mother’s womb!” laughs Dia.