HotFridayTalks
Home Celebrities Who Is Zaheer Iqbal, The Hunk Salman Khan Has Been Promoting? 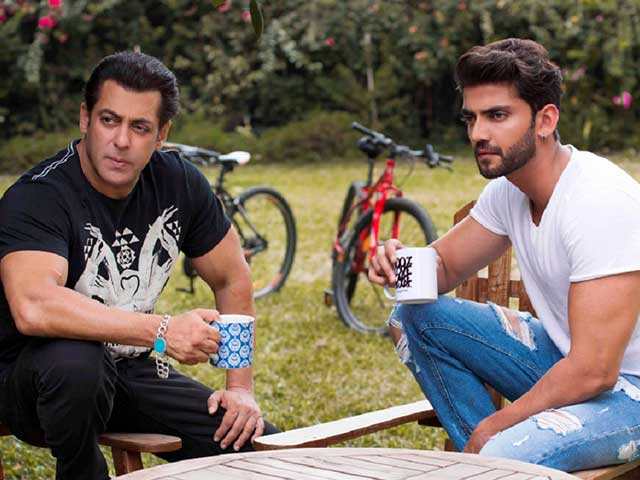 It was only a few months back that Salman Khan launched his baby sister Arpita’s husband Aayush Sharma as the male lead for his home production Loveratri. Aayush, however, is not the first actor to be launched by Salman. Being the large-hearted person and the most secure actor that he is, Salman has launched the career of many, right from Katrina Kaif, Arjun Kapoor, Pulkit Samrat, Sonakshi Sinha, Suraj Pancholi, Athiya Shetty, Sneha Ullal, Zareen Khan, Bhoomika Chawla to Daisy Shah and now this mystery guy!

Yes, Salman left everyone wondering about this mystery guy when he posted a throwback picture with a kid and shared that he’s all set to launch the (now grown-up) kid. Salman Khan tweeted; “Being Launched Tomorrow …KAL dekhte hai yeh ladka AAJ kaise dikhta hai …” Almost everyone wanted to know who this hunk was, where he came from, whose son he was.

After the first tweet, Salman gave his fans another glimpse of the mystery guy and tweeted; “How these kids grow up so soon… ALWAYS keep giving your best #ZAHERO no matter what. Stand tall and always bend backwards for those u love and those who love u, Yeh yaad rakhna that the most important thing in life is Respect and Loyalty. @iamzahero.” He also shared photos of the young guy.

How these kids grow up so soon… ALWAYS keep giving your best #ZAHERO no matter what. Stand tall and always bend backwards for those u love and those who love u, Yeh yaad rakhna that the most important thing in life is Respect and Loyalty. @iamzahero pic.twitter.com/xmn3RXklRk

The mystery guy is none other than the dashing Zaheer Iqbal Ratansi. Zaheer will be seen making his debut in Salma’s next home production which is a Kashmir-based love story. Like most of the people Salman has launched, Zaheer does not belong to a filmi background but apparently Zaheer’s father Iqbal Ratansi is an old friend of Salman and the two have known each other since decades. Zaheer’s family runs a jewellery business and the only connection he has with the film industry is his older sister Sanam Ratansi who is a celebrity stylist.

It is being said that Salman spotted Zaheer during his sister Arpita’s wedding where Zaheer had performed on stage. Salman it is said was very impressed with Zaheer and decided to launch him, which is not surprising as he has always pitched for his near and dear ones in the industry.

As per reports, Salman has been personally supervising Zaheer’s (who he refers to as Zahero) training for the last few months. The film starring Zaheer will go on floors in September this year and is being directed by Nitin Kakkar of Filmistaan fame. While Zaheer plays the male lead, the female lead is yet to be finalised and the makers are on the lookout for a new face.

There have been reports that Zaheer is currently dating Sana Saeed, the little girl who played Shah Rukh Khan’s daughter in Kuch Kuch Hota Hai and is not so little anymore! The reports, however, are not true as HotFridayTalks.com spoke to Sana and she said, “ Well, I read about it too but it’s not true. I am not dating him but we are friends, we went to the same college. However, I am very happy for him like I’m happy when someone does well or gets a good break. I haven’t spoken to him or met him as I’ve been very busy myself with an acting course I am pursuing in LA Film Academy. I just finished my course and am here on a break till I go back again for my masters.”

Salman also shared a picture of Zaheer’s father Iqbal and wrote: “N this is my childhood frnd Iqbal, as a teen he was my bank, I still owe him 2011rs . thnk God he did not take interest bete ko launch Kar raha hoon toh baap ka post toh karsakta hoon na. Lv the pic.”

In a press statement, Salman said that he feels Zaheer is made for the movies as he is a good actor and a born star. We say Inshallah! The industry can do with some promising new talent. Here’s wishing Zaheer All The Best!