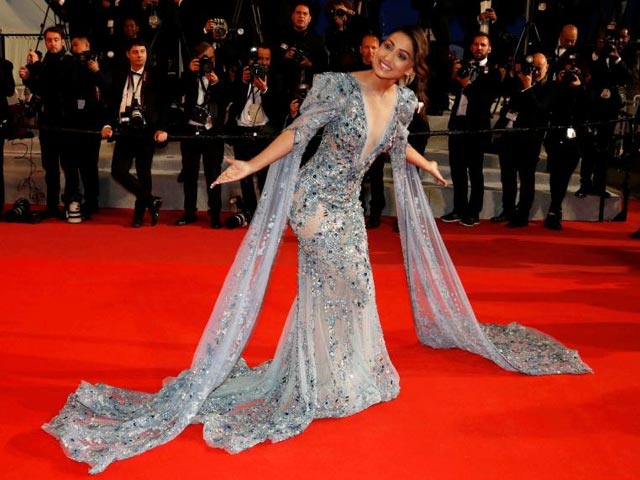 Cannes Film Festival every year sees some of the most famous Bollywood faces on its red carpet. But this year at Cannes there are many new faces besides regulars like Deepika Padukone, Aishwarya Rai Bachchan and Sonam Kapoor Ahuja etc.

At the 2019 you’ll spot more than just a few Bollywood women walking by the French Riviera. Aishwarya will be making an appearance along with daughter Aaradhya Bachchan. This year, taking a break from all the controversies, Kanagana Ranaut too joins the gang of girls and will be walking the red carpet on Thursday, 17 May.

This year there are new faces like Diana Penty, Huma Qureshi and TV actor Hina Khan who are attending Cannes and Kasautii Zindagii Kay actor Hina has already made her mark with her Cannes debut today. Hina walked confidently and totally owned the red carpet, donning a shimmery grey gown. She attended the screening of the Brazilian drama film Bacurau.

Hina is at Cannes for the screening of her short film, Lines, which is based on the Kargil War. Hina who played Komolika in Kasautii Zindagii Kay, shot for her last episode on Sunday and left for Cannes thereafter. Her co-stars including Parth Samthaan, Erica Fernandes, Pooja Banerjee among others gave her a warm send-off by organising a mini farewell on the sets.On the work front, Hina will make her Bollywood debut with a Vikram Bhatt film soon

The Happy Bhaag Jayegi and Cocktail actress, Diana Penty, too makes her debut at the Cannes Film Festival this year. Diana, will be attending the Festival de Cannes as a part of her association with brand Grey Goose. Both Diana and Huma Qureshi ,who also makes her debut at Cannes are representing Vodka brand Grey Goose and are set to walk to red carpet on 19th May for the in competition film A Hidden Life. They will also partake in a discussion titled ‘Women in Global Cinema’, at the India Pavilion on 18 May.

It’s not just Hina, Huma and Diana making their debut at the Cannes but Priyanka Chopra Jonas too makes her Cannes debut this year. Surprisingly, Priyanka who hogged the limelight at the Met Gala 2019made her debut at 72nd edition of Cannes Film Festival, has never attended the Cannes.

Cannes 2019 is sure warming up and looks interesting!

Do You Know Why Is Everyone Calling Urvashi Rautela A Copy...