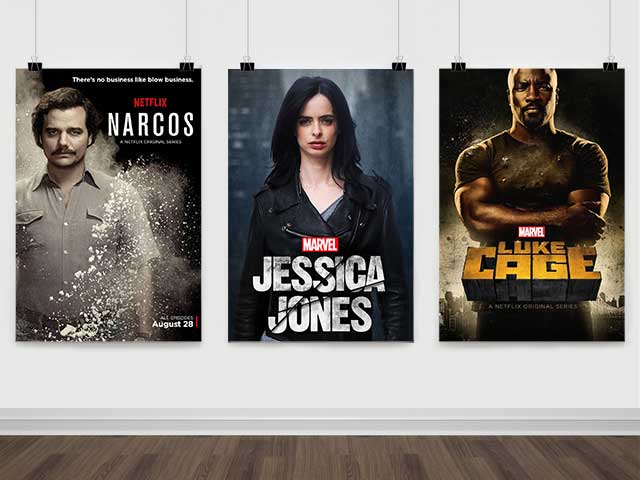 Ever since Netflix started making its original content, there has never been a scarcity of good series to watch on the streaming platform. Shows like House of Cards, The Crown, BoJack Horseman, Orange Is The New Black, Narcos, Stranger Things and many more are available now for us to binge on. And a number of these shows have made stars out of new artists. Let’s take a look at some actors and actresses who have suddenly gained massive stardom after appearing on hit Netflix shows.

Wagner Moura was a well known Brazilian actor, but what really made us take notice of him was his portrayal of the pot-bellied cocaine king Pablo Escobar. The way he dons the dangerous avatar of someone who is not afraid of waging war in order to save his illegitimate business, is just mind-blowing.

Claire Foy had done a number of different roles before she got to be Queen Elizabeth II in The Crown. Her brilliant reprisal of the role has won her several big awards, including a Golden Globe and a SAG award, while she was even the recipient of an Emmy nomination this year.

Set inside a female prison, Orange Is The New Black is a comedy-drama which is still going strong after five seasons under its belt. Its main protagonist Taylor Schilling has managed to impress critics and audiences alike with her layered performances.

Krysten Ritter was pretty well known after her stint as Jesse’s girlfriend in Breaking Bad. However, the role hadn’t given her the kind of stardom which Netflix’s Jessica Jones gave her. Set in the Marvel Cinematic Universe, this show has her starring as a superhero, who opens her own detective agency.

Another Marvel show on Netflix is Luke Cage which has made quite a big star out of Mike Colter. Playing the superhero with super strength and unbreakable skin, he reprises this role with utmost conviction, and impresses at every step with his brilliant acting chops.

Although Stranger Things starred established actors like Winona Ryder and David Harbour, the limelight is no doubt hogged by the kids. While Millie Bobby Brown proved her mettle by grabbing an Emmy nomination, the other kids too vowed us with their excellent performances.

These are just some of the many stars that Netflix has given us in recent times. Do let us know in the comments, who you think deserves to be in this list too.

Akshay Kumar To Now Don The Role Of A Famous King