HotFridayTalks
Home Celebrities Sonu Sood Sets An Example For All Celebrities. Here’s How 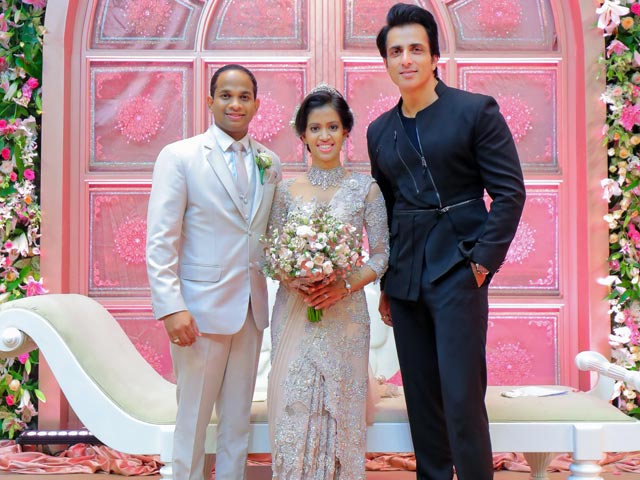 Recently the internet was abuzz with news of Ranveer Singh fans installing solar street lights at a village on the occasion of Ranveer’s birthday. We’ve often heard of fans going the extra mile to make their celebrity idols happy or even just to get a glimpse of them or maybe an autograph or a picture from them. While sometimes some of the celebrities do stop and pose for a picture with their fans or sign them an autograph, not many would do what Sonu Sood recently did for his fan.

Sonu went all the way to Sri Lanka to surprise his fan, Madara on her wedding day! Sonu took a few days off to go to attend her wedding in the midst of his shoot.

“My fan, Madara, who I met 4 years ago used to send me all the snapshots and cuttings of my interviews and news etc that she came across. Then when I went to Sri Lanka for a shoot, she came to meet me along with her family and they were the most humble and grounded people I have met. So I kept in touch with them,” says Sonu speaking about how he came across his fan, Madara.

Recently Madara along with her family came to Mumbai to invite Sonu for the wedding. Speaking about the same, Sonu says, “When they came to India to invite me for her wedding. I was shooting at that time so I requested my producers to adjust my dates so I could go to attend the wedding. I went to Colombo and attended the wedding and I am so glad I did that, because it was a special experience, they had tears in their eyes and were overwhelmed. I felt nice about it, everyone in Colombo who met me at the wedding were happy to see me. I feel it is important to do these small gestures for the people who love you to rise in life.”

When I ask him what made him go all the way in the midst of his busy shooting schedule, Sonu says, “Fans are the ones who pray for us, wish for our success. While there are many and we cannot meet every one personally, but when we have the chance, it’s nice to make them happy and make them feel special, respond to their messages. That’s also what keeps us going in life.”

Celebrities do appreciate their fans, but there are very few celebrities who go out of their way to make their fans feel special. Sonu he says he’s happy he’s formed a bond more than just a celeb and fan, he says, he’s found a new family. “Madara and her family are special, we met as a celebrity and fan and now they are family, I know I have a family in Sri Lanka too now,” adds Sonu.

While there are millions of jabra fans around, we sure do need more jabra celebrities like Sonu!