HotFridayTalks
Home Celebrities Sonakshi Sinha Will Even Be Happy To Be Just A Photo On... 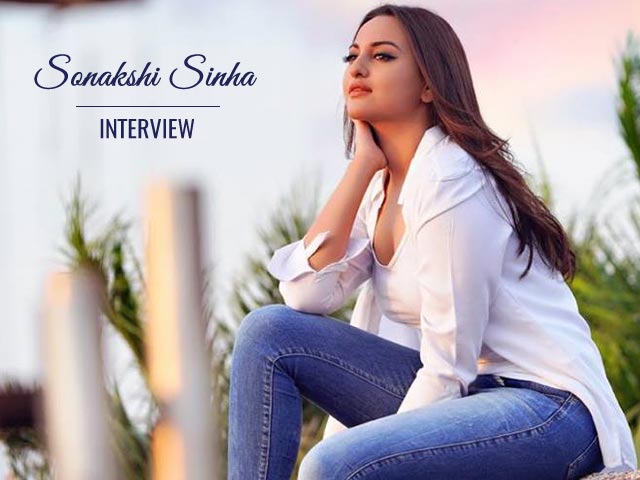 Hot Friday Talks caught up with Sonakhsi Sinha ahead of her soon to be released film, Khandaani Shafakhana, and we got talking about everything from sex education in India, to the genre of films she likes, her favorite film Dabang and much more.

Sonakshi is very happy to talk about her favorite genre of films; comedy, which she is getting better and better with. She says, “Comedy is quite challenging and I like that space because I like challenges.I love to laugh and also make people laugh. Comedy is my favorite genre.”

Sonakshi who has mostly done family friendly films will be seen in a film that deals with a subject that is taboo in India. A subject people shy away from speaking about. So I ask her why she agreed to do a film like Khandaani Shafakhana, where she plays a small-town girl who breaks taboos. “When I got the first one liner, my first reaction was why have they come to me with something like, a subject like this, that’s because I had only done family films but when I read the whole script, I felt I had to do the film. I mean why should a subject like this be a taboo? It is such a relevant subject that has been written in a beautiful, clean way. There is the right amount of humour, sentiments etc. It throws light on a lot of topics,” says Sonakshi.

For a subject like this, there has always been a male protagonist for example in films like Vicky Donor etc. but this is the first time a female is dealing with a subject like this. When I mention that to her Sonakshi proudly says, “Yes that’s true and I am proud of it. I had to do some homework for it. I watched videos of medical representatives and also ads of some sex clinic to learn more about the character.”

Sonakshi feels strongly about schools dealing with sex education as she feels it is a subject that one should not feel shy speaking about. “ Schools should have sex education as a subject. Only then we can educate people about sex related issues and diseases, like any other disease say like maybe fever etc. Why should it be a taboo?”

As an actor, there are times they get to improvise on their acting or character and make suggestions. So I ask her how much of the film has her inputs in it. Sonakshi replies, “Some directors are very rigid about what they want, while some are not. Since I am a director’s actor it’s not like I mind a director being rigid and wanting to go by what they have thought or planned, but at the same time when a director is receptive and gives the freedom to improvise I really appreciate that. With Khandaani Shafakhana, my director Shilpi always gave me the freedom to make suggestions and that was nice.”

Not many know that before she became an actor, Sonakhshi was pursuing fashion so I ask her if she too plans to start her own fashion line like maybe Sonam Kapoor or Anushka Sharama. She says, “Fashion is such an integral part of being an actor so I really don’t feel like I am away but as for starting a label of my own, I haven’t given it a thought. It’s very demanding and right now I want to concentrate on my acting.”

I mentioned to her that in one of his interviews, Salman Khan had said that Sonakshi will always be a part of the Dabangg franchise, she smiles a happy smile and says, “It feels great when someone like him says that. I didn’t want to be an actor but he is the person who showed me the way. He had so much trust and confidence in me, so even if I have to be just a photo on the wall for any of the Dabangg franchises, I will happily do it anytime.”

This is also the first time Sonakshi has worked with a female director, so I ask her if it was any different from working with a male director. “Women directors for me, maybe it’s a level of comfort. I felt like I was working with an older sister, so that was nice. It was refreshing to be working with a woman director. There was this incident where I had to shoot on a live location, with real people, it wasn’t a set and no junior artists. It was a scene where I had to go advertising about the sex clinic, and things like erectile dysfunction, sitting on a cycle with a speaker, in the midst of real people from a small town! It was the most difficult scene so having a female director like Shilpi around put my mind at ease. My point is, the kind of sensitivity with which a woman would handle a subject like this is slightly different from how a man would handle this,” adds Sonakshi.

When it comes to her career, Sonakshi’s journey has had some hurdles and not all of her films have been successful. So I ask her how she handles it all, she says, “When films don’t work, I don’t regret it because I learn what not to do from that film. Anything that teaches you is good! I also don’t like to stress about things that are not in my control but as an actor I give it my best.”

We hope the best also comes her way and she gets to do more of comedy, her favorite genre of films.