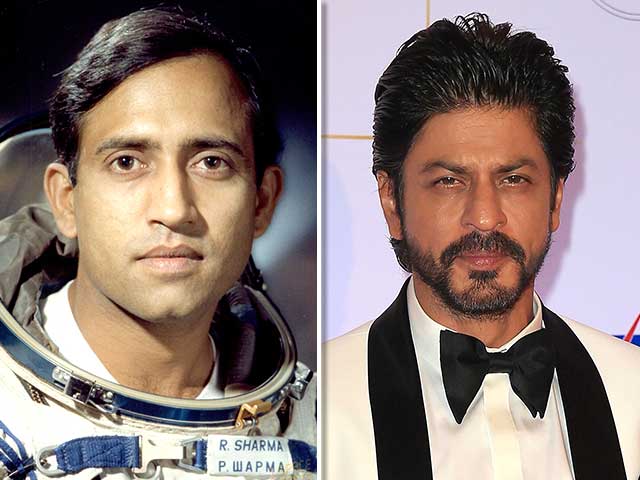 You must already be full with all the talks and pictures of Shahrukh Khan’s upcoming flick as a dwarf in the Aanand L Rai directed film called “Zero”. Well, here we have some more interesting news for SRK fanatics and also for all other movie buffs out there. According to recent reports King Khan is all set to shoot for the biopic named “Salute” based on the life of Rakesh Sharma, the first Indian astronaut who had gone up to space.

Shahrukh was recently reported saying that he wanted to live with “Zero” because it has been tiresome, and hence had not signed a film yet. “Zero” sees Shahrukh essaying a challenging role, that of a dwarf, and his female co-stars are Katrina Kaif and Anushka Sharma, who also starred alongside SRK in “Jab Tak Hai Jaan”. Remember his tweet where he takes the co-stars for the cycle rickshaw ride earlier this month?

Returning to the current news on the Rakesh Sharma biopic, this movie was earlier supposed to be starring Aamir Khan in the lead role. However, after Aamir has declined it, Shahrukh probably gave it a nod, when the filmmakers approached him for the role. Reports say, SRK wants to start shooting for “Salute” sometime in September, this year (2018), so that some portions of it is shot, before the superstar gets busy with the promotions of “Zero” that is all set to release this December (2018).

“Salute” will be directed by Mahesh Mathai, who used to be an ad-filmmaker and is now turned into a movie director. The movie was earlier named “Saare Jahaan Se Accha”, because that was Rakesh’s response to the then Prime Minister, Indira Gandhi, when she asked, how India looked from the space. Rakesh Sharma had joined the Air Force in the year 1970. In 1984, he flew the Soyuz T-11 accompanied by two Soviet cosmonauts, to land on the space station Salyut 7. He was conferred with “The Ashoka Chakra” the highest peacetime gallantry award in India, for his outstanding achievement.

Shahrukh Khan had earlier done roles that were closely related to the lives of real people. A good example of this is his role as the coach of the Indian women’s hockey team in the movie, Chak De! India where he portrayed certain portions of the life of Mir Ranjan Negi. Though, Salute will be the first biopic SRK will act in, we are waiting for an official announcement from the star, regarding this venture of his.

Read Also: What Is Shahrukh Khan And Gauri’s Music Video Musafir All About?

Karan Johar To Get Waxed!