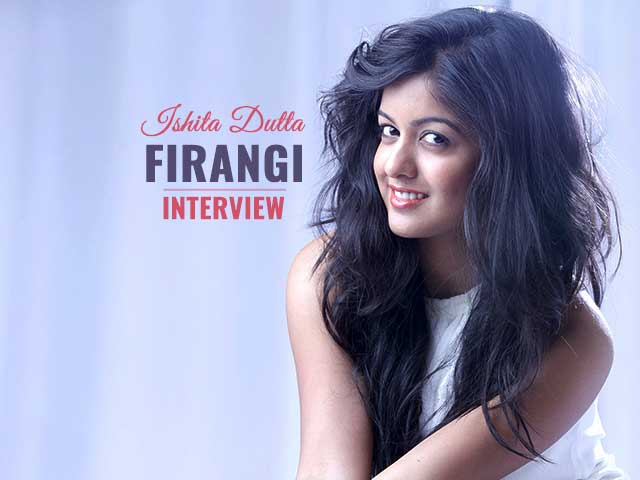 She was better known as actress Tanushree Dutta’s younger sister but today, Ishita Dutta too is slowly carving a niche for herself. Her next film Firangi will hit the theaters soon on 1 December, where he plays the lead along with Kapil Sharma.

Speaking exclusively to HFT, Ishita Dutta tells us about her journey in films so far.

Did Ishita have an easy break in Bollywood?

After she completed her graduation she came to Mumbai to join her older sister Tanushree to pursue an acting career. That was when her sister insisted her to go for an acting course. She joined Anupam Kher’s Actor Prepares for a 3-month course. “it was like a personality development for me as I was very shy as a person. That course changed me as a person in a good way. I did ads after that, television shows and South films. My first break would be the television show that I did called Ek Ghar Banaunga,after which I did my first film, Drishyam,” says Ishita.

Reel self vs real self

“My character in Firangi, Sargi is a very simple, shy girl back in 1927 where girls didn’t have the courage to voice their opinions. The film is about the era where people just saw each other and fell in love, ‘aankho aankho mein ishara ho gaya,’ something that is so unlike today’s times,” adds Ishita. On being asked about whether she prefers a love like that, she laughs and tells us that in today’s time, we are too used to cellphones so she can’t imagine her life that way. She says, “Also there are so many apps these days like Tinder, Instagram, TrulyMadly, etc. so many of them. I don’t even know half of them. I think as Ishita it will be very difficult for me to go and live like Sargi but it was a fun experience to re-live that era for those two months. To experience how people lived at that time.” Ishita does not relate much to her character, Sargi from Firangi as she tells us that they are totally different. While Sargi talks less and thinks before she does, Ishita is not like that. “I just blabber. But there are certain things like being an introvert which I am like her,” she adds.

Chemistry with Kapil on Firangi

Ishita says she has enjoyed working with Kapil Sharma, who is not only the lead actor in the film but is also the producer. “Working with Kapil has been amazing. He is hilarious and I remember one incident where we were laughing so much because of something he said and we had to even halt the shoot as all of us were uncontrollable! Every time I tried to be serious, it was very difficult because I would look at his face and start laughing. He finally realized that he was the producer and his money was at stake so he got a bit more serious and said let’s start shooting!” she tells us.

She also feels that as a producer Kapil is brilliant and any director would love to have him as a producer because he does not compromise on anything when it comes to doing the best for the film.

About the casting couch

Ishita says that she has never faced any casting couch in Bollywood so far but will never compromise on self-respect and dignity for a successful career. She says, “I think I am very fortunate to have my sister, who is always there to guide me.” she also feels fortunate for having entered the film industry at a time where newcomers are getting a chance and films are not only just about glamour but it is more character and content based.

Ishita feels that acting is inborn but institutes brush you up. “It’s just like how you go to school to learn more but ultimately it’s your hard work that gets you through. Similarly, these acting schools/ institutes help us to learn the finer points about cinema from lighting to camera angles, positions etc. The institute taught me a lot but also the auditions I went for and the television that I did help me to learn more,” she informs.

Team HFT wishes that her dreams come true. Wishing her all the best for Firangi.

Rajkummar Rao Does Not Believe In Ghosts