HotFridayTalks
Home Celebrities Akshay Kumar Is All Set To Rule The Screen In The Upcoming... 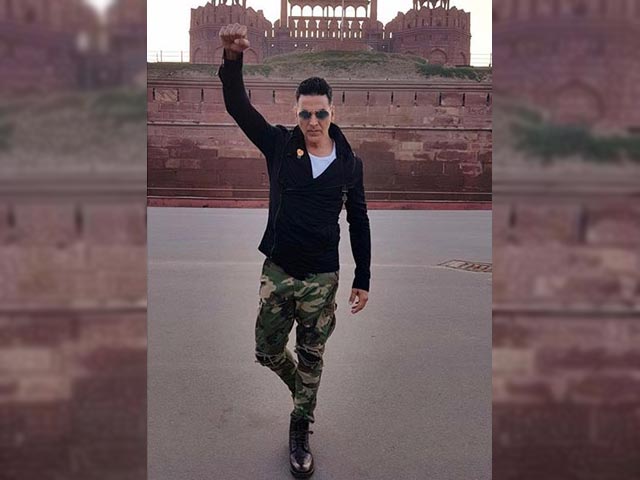 He is a man of many talents. He is the man who stepped into Bollywood and took his time to grow and proved it to the world that hard work and dedication can win you anything. An actor, a stuntman, a martial artist, a producer and a philanthropist, he is none other than our very own Khiladi Kumar. Akshay Kumar is that integral part of B town who made his mark without having an influential push behind his back. All he had and still does is his faith in hard work. He is fifty one and he can still very well give the newbies of B town a tough competition. However, one among the many great things about Akki is that he has never let his success get to his head. He has been very humble and he has taken his work very seriously, irrespective of the roles he was offered at the inception of his career.

Though it has been a long time, he never seems to be at rest, with amazing movies like Kesari and Padman in his kitty, some of the upcoming movies of this legendary actor are:

This is going to be a fun project with a stellar star cast @akshaykumar @SunielVShetty @SirPareshRawal
Looking forward to #HeraPheri3 😀https://t.co/A1Fp3WZAUO

We have not forgotten the rage the trio of Babu Bhaiya, Shyam and Raju created. There are certain things which never get old and of which we can never get enough of. The Hera Pheri franchise is one of them. After a long gap since the second installment of the movie, the trio will soon be back with the third installment of the movie, Hera Pheri 3. Directed by Priyadarshan, Hera Pheri continues to rule the genre of comedy in Bollywood. Hera Pheri 3 will be directed by Inder Kumar and will release in 2019.

Housefull 4 – The Saga Of Sequel Continues

It seems like B town is thriving on sequels and this time, the duo of Sajid and Farhad will pump up the comedy with the fourth part of the Housefull series. The movie will star Akshay Kumar, Riteish Deshmukh, Bobby Deol, Kriti Sanon, and Pooja Hegde. This movie will be super special for it will feature Sanjay Dutt in a special role. Housefull 4 is all set to illuminate the big screen on Diwali 2019.

Proud and excited to bring the story of India’s Mars Mission, #MissionMangal to you. Coincidentally the mission was launched on this very date, 5th Nov. 2013. Meet the team and do share your best wishes for our shubh mangal journey. Shoot begins soon 🙏🏻 @foxstarhindi pic.twitter.com/SYfSmoZEdb

Directed by Jagan Shakti and produced by R Balki, Mission Mangal is a multi starrer movie, which will feature all the great actors of B town like Akshay Kumar, Vidya Balan, Sonakshi Singa, Taapsee Pannu, Shraman Joshi, Nithya Menen and Kriti Kulhari. The movie will be co produced by Fox Star Studio and will release on 15th August, 2019.

Good News – The One With The Rising Stars

Good News will see two rising stars of b town, Diljit Dosanjh and Kaira Adwani along with Kareena Kapoor and Akshay Kumar, who have not been cast together in movies for a long, long time. The movie will release on 6th September, 2019, and we expect Good News will bring great news to the audience.

Sooryavanshi – The Story Of The Cop Continues

Sooryavanshi will be the second installment of Rohit Shetty’s Simmba. Akshay Kumar will be seen as a cop. He was last seen playing the role of a cop in Rowdy Rathore and we know how he aces the role. He will be seen walking in the shoes of the protagonist, Sooryavanshi, and the movie will release in 2020.

Sharing with you all the first sunrise of the New Year 🙂 My workout motivation : two action-packed films this year, so find something to make you wake up, get up and get out there! Wishing you all a healthy and #HappyNewYear

It seems that Akki is leaving no genre untouched. Having tried and tested almost all the genre of movies, he is all set to walk back in time as he will play the role of the brave king, Prithviraj Chauhan in his biopic. The movie will be directed by Chandraprakash Dwivedi and produced by the Yash Raj Films.

Apart from that, Akshay will also star in the remake of Tamil horror comedy “Kanchana”, along with R Madhavan and Kiara Advani. With so many great upcoming movies, we are certain that Akshay Kumar still has a very long way to go in B town.

2019 Is Going To Be An Interesting Year For Riteish Deshmukh....