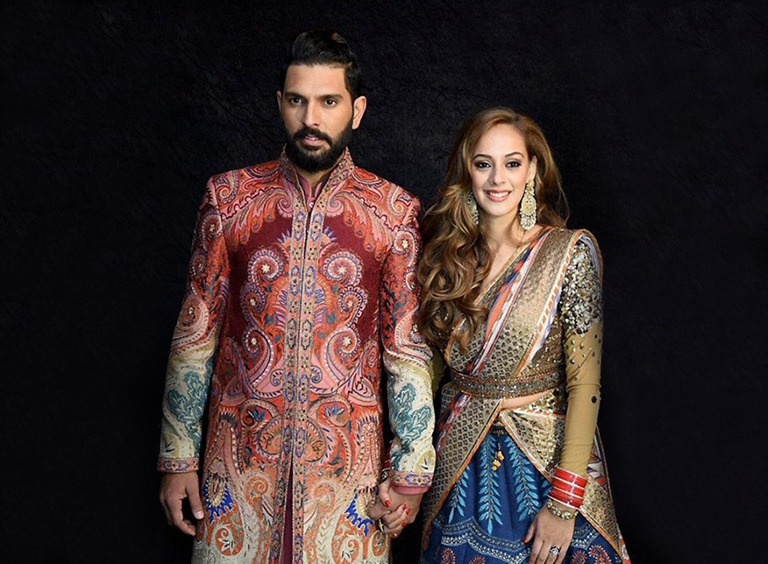 We Indians love Bollywood and Cricket. Isn’t it a twin delight when sizzling hot celebs from Bollywood tie nuptials with cricketers? And this trend has been around for a while now.

There are many cute tales of love and less between cricketers and actresses. Here are the most popular ones we like.

Bollywood and Cricket have had a close connection since the beginning. This camaraderie was recently refreshed by the engagement between cricketer Zaheer Khan and Sagarika Ghatge of the “Chak de India” fame (though, in the movie, she dumped a cricketer to symbolize female empowerment).

Yesteryear Sharmila Tagore and Mansoor Ali Khan Pataudi were classy and royal. The late Nawab of Pataudi and the Kashmir ki kali met through friends and fell in love. After battling odds from family and religion, they tied the knot. They were blessed with beautiful and now popular children Saif Ali Khan, Soha Ali Khan and Saba Ali Khan Pataudi.

The recently released film “Azhar” revealed what was already known to all. Sangeeta Bijlani and Mohammad Azharuddin began dating after shooting a commercial advertisement together, and tied the knot in 1996, after the latter ended his first marriage. But this too lasted only for 14 years, when things came to naught. They headed for a divorce in 2010, after Azharuddin was linked to badminton player Jwala Gutta.

Ironically, before marrying son of cricketer Mansoor Ali Khan Pataudi, Saif Ali Khan, Amruta Singh was in a relationship with cricketer Ravi Shahstri. They were very open about their love and spoke of it in every interview before things ended abruptly.

The No Longer Eligible Bachelor –

The talented cricketer and heartthrob of many Indian females, Yuvraj Singh had been linked with Kim Sharma and Deepika Padukone. After an inspiring comeback from battling cancer, he finally settled down with Bollywood beauty Hazel Keech in December 2016.

The strong and steady – Geeta Basra and Harbhajan Singh

After evading attention for many years, Harbhajan Singh and actress Geeta Basra got hitched in October 2015, and now are blessed with a baby girl.

The hot and happening – Anushka Sharma and Virat Kohli

The most popular couple remains Anushka Sharma and Virat Kohli. Despite evading direct questions on interviews, the two firmly stand up for each other on social media platforms, like Virat Kohli’s instagram post Shame which lashed out at fans who suggested that Sharma was unlucky for him. They are even seen together on many occasions like the New Year’s Eve 2016 celebrations in Uttarkhand with their families. Fans are guessing another wedding bell soon between the world of cricket and cinema.

Chitrangada Singh Has A Very Strong Say About The #MeToo Movement